Are West Austin tastes in painting taking a swing toward the provocative?


In grayDUCK or Big Medium, this show wouldn't be so surprising. At Co-Lab, Museum of Human Achievement, or Little Pink Monster, it might even come across as peculiarly mild. But at Wally Workman Gallery, the conservative arts locale catering to the affluent 40-70 inhabitants of the hills west of Mopac, Ian Shults' exhibition depicting 1950s and Sixties bacchanalian parties and their aftermath comes as a big shocker. 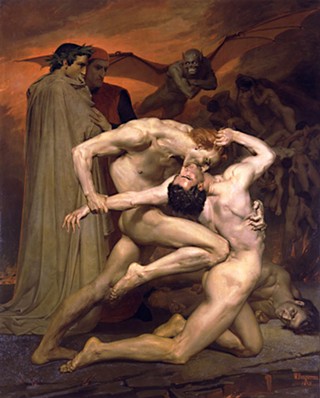 The gallery is known for playing it safe with its clients' sensitivities, so the provocative exhibition implies one of two exciting developments: 1) Wally Workman is taking a new tack, gambling with one of its shows and pushing at the edges of its clients' values; or 2) the tastes of its clients are coming around to slightly more contemporary thrusts, and the gallery is listening. It's hard to tell who is leading in this lockstep dance, but regardless of who's dipping who, the change is welcome. "Sex, Drugs and Leave Me Alone," along with other recent shows that flirt with more intense subject matter, show a more daring side of the gallery and maybe, just maybe, could bring a younger generation of viewers through the door.

It's not that Workman hasn't shown Shults' art before; he first exhibited there in 2010, but that work showed the bright, glamorous (and mostly PG-13) side of drunken revelry and sexed-up gatherings, the fun buzz and never the hangover. Now though, the gallery is backing that artist as he delves into some of the darker (mostly R-rated) implications of inhibitionless social interaction.

Through his consistently fractured, shaking lens, Shults now paints victimization, senses of betrayal, and a sullen loneliness in some of his characters. In Alice's Troublesome Trip Abroad, two young naked women in a contorted embrace kiss with open mouths. Formerly, Shults would have left it at that, but now a second smaller canvas is included in the work, conjuncted off center at the top edge of the primary erotic image. Here, a middle-aged, unattractive couple in business attire cackle with gaping grins as they down bottles of liquor, presumably as spectators and instigators of the scene below. Rather than something done out of joy, the women become performers doing something they are probably being paid to do.

The painting closely mimics William-Adolphe Bouguereau's 1850 Dante and Virgil in Hell, an image of the eighth circle of hell in which two nude men are seen in eternal grisly battle, the head of one yanked back as the other bites into his neck. The knee of the attacker in the back of his victim, the contorted position, and the proximity of the heads are all mirrored in Alice's Trip. Cinching the deal on the malevolence of the cackling couple is their parallel in Bouguereau's work: a grinning demon in flight. Far from the scintillating ecstasies that Schults presented earlier, in this and many of his recent works he now pulls back the veil to expose a hell running parallel to the glamour.

It may be some time before Workman shows sexualized depictions of naked men in the gallery (it isn't 1850 anymore ...), but even so, it's good to see it take a step closer to the edge in Shults' work. 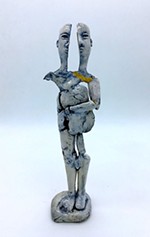