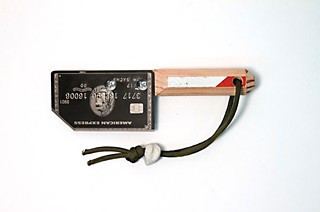 Austin has been the epicenter of all things Tom Sachs since his "Boombox Retrospective" launched at the Contemporary Austin in January. Listeners can hear the NYC-based artist's playlists on the pirate radio station 94.3FM, view his work at the Jones Center and Laguna Gloria, and can now find a further extension of his work living in the Project Room at Lora Reynolds Gallery.

The exhibition, titled "Nuggets," showcases the pop-infused sculptures from Sachs' more recent work, with the earliest piece dating from 2011. However, many of these efforts ring of the cultural subversion that helped cement Sachs' standing as a contemporary arts force in the Nineties. In Untitled ("I loved my sister's Barbie so very much. My parents, afraid that I'd turn out gay, encouraged carpentry. In secrecy, I made my own. It wasn't love, only lust."), Sachs crafts a plywood Barbie in the nude, complete with tacked-on wooden breasts. It's a crude rendition that tells a personal story of the artist's own relationship with the doll but also dismantles the emphasis on perfection and beauty that Barbie often encapsulates. Similarly, in African American Express, a black American Express card is fabricated into a prison shiv. It's another tongue-in-cheek sculpture that helps place classism and race – two subjects that Sachs frequently toys with – within the exhibit's scope.

"Nuggets" draws from works that are immediately identifiable as Sachs'; they ring of the artist's sardonic, cynical ethos. Fans of his will relish another opportunity to see his art celebrated in Austin, but Sachs fatigue is not something to be ignored. While a fine exhibition, "Nuggets" must compete for attention with the other Sachs exhibitions in town – and, ultimately, it feels like a redundant annex of the artist's work already on display.