It's a bit unnerving when Patrick Terry turns out to be somebody other than who you think he is.

You show up for an interview with the man, having done a little Googling to make sure you can recognize him easily, and you're feeling pretty cool, pretty leveraging-the-digital-synergy, because you already know that this Patrick Terry is the local guy behind P. Terry's hamburger stands, and he's opened a certain amount of burger joints, and he's got a wife and kids, and he's thin and kind of tall, nicely trimmed gray hair, supposed to be a quietly modest sort of fellow. Who happens to be producing a touring-from-NYC spectacle of stage magic and juggling and comedy called Wondershow at the Vortex.

And then you walk into the coffeehouse to meet him and he's nowhere to be seen. And this guy, who recognizes you because he's done his own Googling, this other guy, he walks up and says, "Hi, I'm Patrick Terry."

He's got nothing to do with burgers – except maybe he eats them, and maybe he eats them at P. Terry's, maybe because Fast Food Nation's Eric Schlosser says that's where he eats when he's in town – but he is producing a touring-from-NYC spectacle of stage magic and juggling and comedy called Wondershow at the Vortex.

"I moved to Austin six months ago," says this Terry. "I've been in New York the past 12 years as an actor and producer – and also as a magician. I've been performing magic for almost 20 years, all over the world. But mostly I'm a filmmaker, and I came here for a producing job on a TV show, and I've been doing that for the last several months and also exploring different creative opportunities in the city. And that led me to the Vortex theatre. So I've been performing a regular show there, called Magic Hour, which is my one-man magic show. And now I'm producing Wondershow."

Wondershow. You want to see some world-class talent, especially of the prestidigitational variety, you're going to see it here. Andrew Goldenhersh, an internationally touring showman, is something of a magician's magician: David Copperfield's licensed some of the man's work for his own use. Vinny DePonto does sleight-of-hand manipulations and mindreading like nobody's business, and has been wowing crowds in the Big Apple for years. And Marcus Monroe, well, he's a juggler, so maybe nothing's going to transform or vanish in his lightning-skilled hands – but it sure as hell may want to.

"I've done six productions of Wondershow in New York in the last 18 months, with a bunch of different performers," says Terry. "And since this is the first time I'm taking it on the road, bringing it to a new city, I wanted my dream team – and Andrew is my favorite magician. I saw him do a show maybe nine or 10 years ago, and I can remember every moment. He's peerless in his skill, and he gets magic, he knows how to translate it to an audience in 2015 without seeming pretentious or condescending. So, between him and Marcus Monroe and my good friend Vinny, we've got a solid core of performers. And I've been able to mix that with some local talent – Sarah Sparkles, who's an award-winning aerialist, number one in Texas and just competed at the national level – and some live music, and it's going to be a fun, fun night."

And how did this producer start out in the business himself? How did he wind up in the International Brotherhood of Magicians instead of, say, the Global Association of Hamburger Entrepreneurs?

"I always loved magic," says Terry, grinning. "My brother and I had an act when we were kids, did a lot of preschools, nursing homes, birthday parties, that kind of thing. I was already growing up in the theatre, doing plays and things like that, and magic came out of that experience. I was in a play when I was 10 or 11, it didn't have anything to do with magic, but there was a magician in the cast. This guy had some skills and a good vocabulary, and I was around that precocious age, I was the youngest one in the cast, and I guess you could say I caught the bug at that point. I was always fascinated by the idea of mystery, and so I kind of developed that over the years. More sophisticated material, more sophisticated audiences."

Both of which, we reckon, will be found at the Vortex this weekend. 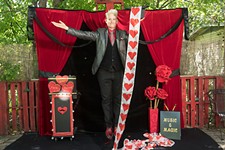 Have Austin's Magicians Vanished for Good?
With the coronavirus shutdown, it's now you see 'em, now you don't