Hands Up Hoodies Down

"My hands are up. I'm not resisting."

A hoodie dangles from above, floating in the air, perfectly centered over a target and crosshairs painted onstage. Though no one is physically wearing the hoodie, one can easily envision a number of black men – a number far too high – caught in the crosshairs, wearing it and all it represents: men like Trayvon Martin, Eric Garner, or Michael Brown. Maybe members of our own community. Maybe someone's child.

Director, co-writer, and performer Zell Miller III has mounted a stirring and provocative production that gives voices to these men and women, answers their cries, and lets them know that their deaths were not in vain and will not be tolerated in the future. Hands Up Hoodies Down, which just ended its three-day run at the Vortex, blends slam poetry, music, rap, movement, and improvisation together for a poignant piece with a message as loud and clear as the chants at rallies nationwide: Black lives matter.

Joining Miller was an impressive team of gifted collaborators and performers: co-writer Chelsea Manasseri, Kann, Da'Shade Moonbeam, T-Fly, Ashé Arts Collective, and Sadé Jones. The performers transitioned with ease among various vignettes, some clearly premeditated and others more off-the-cuff. The presentation included impressive improvised raps and monologues, beautiful dances (choreographed by the talented Jones), and on-the-nose satirical sketches. Miller gave an especially moving performance in a scene imagining a phone call in which he's told that his son was shot by an officer. Though invented, the scene bore real weight and, as Miller stated, represents a fear that black fathers are saddled with daily.

Hands Up was not only a call to change for our nation; our beloved Austin was not allowed to sneak away blamelessly. For a city that considers itself quite progressive, Austin is far from colorblind, and the production rightly and smartly draws attention to many of its shortcomings, from unjust deaths in our own backyard to the black-and-white dividing line drawn by a certain interstate highway. This was a piece that was not afraid to offend its audience or make it uncomfortable, but instead intended to challenge it, sparking reaction that would lead to action.

There is, however, one glaring negative aspect of Hands Up Hoodies Down: the fact that its brief run will prohibit it from reaching the wide audience in dire need of its urgently powerful message. Austin has recently seen its fair share of remounts, and a production with such gravitas certainly merits a longer run to make its point and truly incite change. Then again, ideally this point – a point that should have always been common sense – would not need to be made in the first place.

Hands Up Hoodies Down 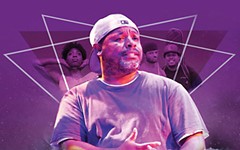 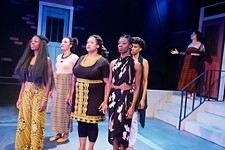 The Vortex’s Ballot Eats the Bullet
This timely production's extraordinary performers speak truth, as black women in America, that makes us see them