"000000" makes something out of nothing at Pump Project 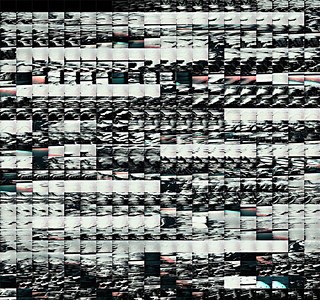 Jessica Mathews and Kyle Evans both love to experiment. Mathews' work has evolved dramatically since she returned to Central Texas after graduating from SCAD. She began exploring the role of human error in tech through paintings and prints, while Evans has a longer history of pushing his digital work with homemade circuits and transmitters that create aesthetic and audio cues which represent personal relationships with technology. Bringing the two together has resulted in "000000," a multimedia exhibition forged over months of collaborative experimentation.

Mathews and Evans were connected by Pump Project Gallery Director Rebecca Marino, who saw a common thread in their works. Mathews, however, was due to leave Austin for three months for an artist residency in Iceland. The two artists struck up communication through email and began sending images and videos that would become the foundation for "000000." Those that dabble in coding or image manipulation know that 000000 represents the hex code for the color black, which is exactly where Mathews and Evans started. Hoping to engender an exhibition out of perceived nothingness, Evans and Mathews began building off of each other's work in a data relay that spanned 4,000 miles between Iceland and Texas.

The result is a dense show that showcases digital, video, painting, and prints. Evans is an artist with no limits on what technology he can embrace. Cathode ray tubes are as integrated into "000000" as computer screens from the Nineties. It's a feat in and of itself to see this somewhat dated technology working, let alone acting as such an acute point of conceptual communication. Evans plays with how black can be layered, portrayed, and broadcast through digital means, while Mathews anchors the show more tangibly with paintings derived from stills of Evans' digital interplay.

The show is designed to be chronological, and Pump Project has provided audiences with the emails between the artists that helped build "000000." It's a fun inclusion that provides deeper context for how these artists work and sought to complement each other for the exhibition. Overall, Mathews and Evans are to be commended for taking the remote concept of hexadecimal technology and giving it a richer identity.