Robert Rodriguez gives Austin a look at some originals by the master of fantasy art, Frank Frazetta At the Earth's Core

Few fantasy artists have had the impact or been more influential than Frank Frazetta. His cover images of slithering demons, axe-wielding barbarians, sensuous warrior women, and the like had paperbacks in the Conan, Tarzan, and John Carter of Mars series flying off bookshelves in the Sixties and Seventies. And his distinctive visual style, with its Renaissance-influenced flair for composition and sumptuous detail, has been often replicated and referenced by younger artists. 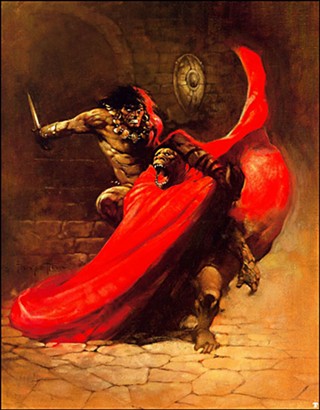 Local one-man film industry Robert Rodriguez is one, and he's been a Frazetta superfan since he was a boy. "Those little Ballantine books they put out, The Fantastic Worlds of Frank Frazetta, volumes 1-4, I had those since I was 11," he says. "I would cut out Moon Maid and Chained and stick them on my wall."

Now, Rodriguez has the originals to look at, and this week, you'll be able to look at them as well. Austin's favorite Troublemaker is mounting an exhibition of the fantasy master's artwork to run during SXSW. On display will be a dozen Frazetta works, including such signature images as At the Earth's Core, Man Ape, and Death Dealer II, plus a rare self-portrait of the artist. 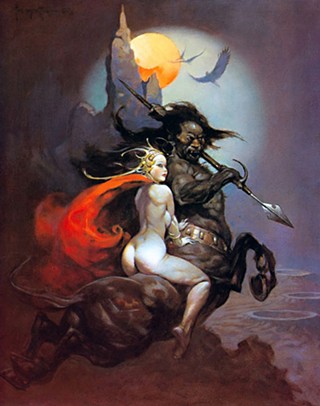 Some pieces come from Rodriguez's own collection, but others are on loan from the artist's estate. Rodriguez befriended his artistic idol after commissioning Frazetta to create a poster for his 1996 film of From Dusk Till Dawn. The two became friends and, after Frazetta's death in 2010, Rodriguez says, "The family came to me and said, 'He always trusted you, he always liked your business sense, it was very similar to how he worked, could you help us figure out what to do with the art?'" Rodriguez discouraged them from even considering selling off Frazetta's legacy and instead encouraged them to help restore his reputation as a major fantasy artist.

Rodriguez himself has long sought to burnish Frazetta's reputation with a remake of Fire and Ice, the 1983 film collaboration between Frazetta and animator Ralph Bakshi. "I always thought I could make art move," says Rodriguez, "I ended up doing it with Sin City, but the original idea was Frazetta." As he continues preproduction on his Frazetta-inspired film, Rodriguez is deepening his commitment to share the artist's work with the public. His long-term plan is to establish a permanent home for some of the Frazetta collection here, but in the meantime his pop-up gallery will give audiences the chance to see Frazetta's masterful grasp of light and shadow in person, to see the vivid colors and individual brush strokes that even the highest-quality reproductions in print or online can't capture.

Rodriguez experimented with a similar temporary exhibition during SXSW 2014. "I came up with it the week of SXSW," he says. "I'd see all these signs for all these events, and I went, 'Oh my God, I should be showing the Frazettas.'" The response was so positive from people who "just stumbled upon it" that he decided to do it again, with the idea of "let's put out a little more advance word this time." Sharing the walls will be original art by legendary film poster artist Drew Struzan, comics icon Frank Miller, hyper-realist Sebastian Krüger, and sculptor Clete Shields, as well as props from Rodriguez's films and self-portraits by cast members of Sin City: A Dame to Kill For, including Lady Gaga, Rosario Dawson, and Joseph Gordon-Levitt.

Still, the major draw remains Frazetta. For the director who grew up staring at cheap reproductions from his bed, showing off the originals is something he takes real joy in to this day. "To see it up front and up close," says Rodriguez, "it's a thrill I never get tired of."

Robert Rodriguez presents the Frank Frazetta Gallery, March 14-21, noon-8pm, 920 Congress. A $10 entrance fee will go toward the preservation of the art. Limited edition giclée prints of Fire and Ice, Chained, Moon Maid, and From Dusk Till Dawn will be available for purchase. The Future of Fantasy Art
The season's best oversized books