This year's SXSW is James Adomian's festival, we just laugh in it 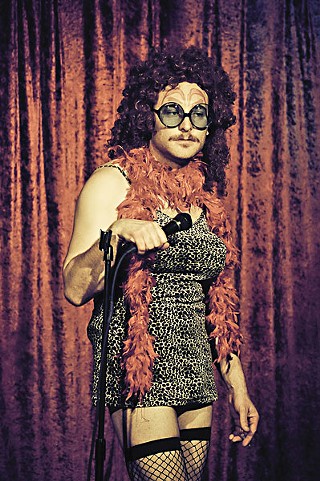 By the time SXSW Comedy draws its last laugh this year, comedian James Adomian will need a comfortable place to cool his heels – and that bald cap his disciples can't get enough of. You know the one: that shiny, beige (and sometimes ill-fitting) second skin bookended with jets of wiry gray hair smeared like Jif over a mind that's kept fans and peers enthralled for years.

"What I love about James," says comic Doug Benson, "is that he's not only great at impressions, he becomes the characters he plays. Which is not just exciting, it's a little scary: because a lot of his characters are complete lunatics, and he's not afraid to let their darkest thoughts come out. That James isn't a regular on SNL is insane to me."

Adomian, the 35-year-old comedy chameleon – stand-up comic, master impressionist, actor, sketch player – returns to SXSW Comedy with a vengeance for his fourth consecutive rodeo. In addition to stand-up appearances, he'll again wax psychotic in the guise of former Minnesota governor and wrestling icon Jesse "The Body" Ventura in another bone-chilling edition of Conspiracy Theory Live With Jesse Ventura. And the script he and Scott Aukerman wrote for a proposed sitcom called The Embassy will be read live.

Unlike years past, though, Adomian has been put on a pedestal by the Festival at large this time: He'll get to channel his inner Billy Crystal as host of the SXSW Interactive Innovation Awards on March 17.

That's a grand honor disguised as a tall order for a man who'll also be crackin' weird and wise with the likes of Comedy Bang! Bang! friends Aukerman, Nick Kroll, Todd Glass, Wyatt Cenac, Horatio Sanz, and even Bob Saget at various points during the Fest.

The period of Adomian's career in the "emerging" talent category appears to have sailed. After nearly a decade of work in professional comedy, the former Last Comic Standing contestant has broken through.

"James is electrifying," says comedian Andy Kindler. "His impressions are both devastating and delightful, even when he's portraying someone highly unpleasant. He's technically brilliant, but he's not a mimic. His genius is capturing the essence of a person or a corporation or a country, so his performance is always revelatory and hilarious. Watching him work is pure joy. He's my favorite comic in the world! There. I said it!"