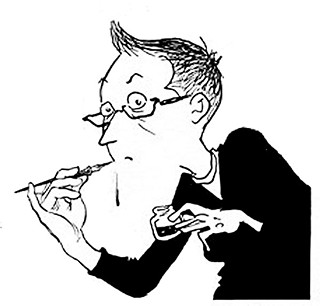 From protagonist Mo's très Clinton­-era Where's Waldo get­up to depictions of spooning or how somewhere there always seemed to be a cat, Bechdel jotted our tropes (before they were tropes), sketched our stories, and told them as we lived them. Numerous comics collections, graphic novels, and books later, she's certainly achieved iconic status: Her autobiographical Fun Home earned Time magazine's Book­ of ­the­ Year honor and its own Broadway musical, and she herself was named a 2014 MacArthur Genius. ("Ha! It's totally unnerving. I've never felt like more of an idiot.")

She's coming to Texas for the first time in years and for her first-­ever SXSW, where she'll be seated with radio producer/host Maria Hinojosa (Latino USA) and filmmaker/fellow MacArthur Fellow Joshua Oppenheimer (The Act of Killing) on the Interactive/Film panel Storytelling Superheroes. Like the best storytellers, Bechdel takes the snippets of culture's gangly bits, adds her own Gorey­-ey, Hergé­-homaged spice, and creates an entire world.

"When I was drawing my comic strip, I consciously thought of it as an archive," she says. "Always looking for what was happening in the world, in the culture: 'I wanna create this chronicle.' 'I wanna get that into my comic strip.' You know, the T-­shirts people were wearing, the books they were reading. I [wanted] to save them because they are so ephemeral."

But there's a "careful ­what ­you ­wish ­for" edge to this sort of ephemeris.

Every film geek who daubs on feminism like so much L'air du Temps touts as canon a little tidbit known as "the Bechdel Test," a three-­point criteria for film worth: 1) It has to have at least two [named] women in it 2) who talk to each other 3) about something besides a man.

More important than what the standard postulates is this: Go ahead and Google/search "Bechdel." Almost every engine auto­loads the word "Test."

Curiously, for old fans (me), the cool hype around this concept feels sloppy and not really respectful of the context. It came from one strip ("The Rule," which credits friend Liz Wallace for the idea) and was one of about a billion no-­shit epiphanies expressed in her comic strip world.

The test's hegemonic heft strikes Bechdel, too. "It was weird at first. I found myself resisting it, feeling confused by it. It was something I wrote decades ago back in the Eighties. But it's interesting as an illustration of how the mechanics of culture work," she adds. "That this idea, subcultural 30 years ago, is now being discussed in the mainstream."

Moreover, this phenomenon seems like something she might do a comic about. "I would!" she laughs, "If I still drew comic strips."

This notion of how and what is deemed significant over time is illuminating. Since we were deep in it, I asked her to look around her office and pick one thing and reflect on its significance in her storytelling.

"I've been spending the past week going through these insanely detailed journals I kept of my life in the Nineties," she laughs. "Oh my God. It's really overwhelming. I've been forcing myself to read them all. Because these notes are so detailed, I feel like I'm actually back in the Nineties. It's very confusing to look up from my computer and realize it's 2015! I'm not 35, and I'm not going off to a Lesbian Avengers demonstration. There's no fucking way I would have remembered any of this stuff if I hadn't written it down."

Had she the forethought to preserve history for the future Alison Bechdel?

"It was more like compulsion," she asserts. "To save it. And to read back through it 25 years later."

This visceral look back might be similar to the feelings her works instigate in others. For me, I get jettisoned to 1992, when Austin's BookWoman used to reside on what we now call "Dirty Sixth." (Our Austin feminist bookstore, unlike DTWOF's Madwimmin Books, has survived.) "Lucky for us," I tell her, "your impulses turned out to be somewhat academic, definitely historical, and probably historic."

"What's funny," she replies, "The big collection of Dykes to Watch Out For is sometimes used in gay and lesbian history classes."

Makes sense to me. Were the story of my life a comic, in some frame there'd certainly be a coffee table strewn with all the signifiers: a "Best of Austin" edition of this newspaper, some wacky Seventies or Eighties sheet music (probably "Fly, Robin, Fly"), and surely some Dykes to Watch Out For. "For my formative dyke years," I told her, "you were such a bright light. While I hadn't yet earned my stripes in the community, you showed me there was one – that the life I suspected, exists. So, in turn, your books show up as pieces of other people's stories."

"Yeah," she says flatly. "That's kind of weird and meta." 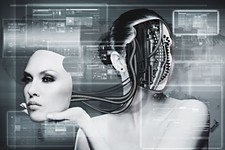 Do Cyborgs Dream of Uninterrupted Sleep?
The Bionic Woman: We have the technology 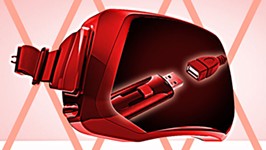 Simulated Sex
The ins and outs of virtual pornography