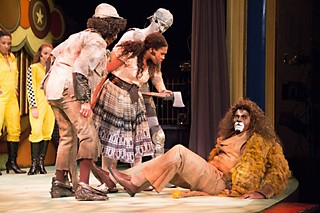 
Reds, oranges, and greens. Blues, indigos, and violets. And one mustn't forget yellows (of the hue best suited to brick roads, of course). Yes, the whole ROYGBIV takes center stage in the Austin Community College Drama Department's production of The Wiz.

The brilliant color palette of Oz comes courtesy of design trio Ia Ensterä, Megan Reilly, and Stephanie Dunbar, whose set, lighting, and costumes, respectively, create a Technicolor world harkening back to the particularly bold chroma-scape of the Seventies, when William F. Brown and Charlie Smalls' musical adaptation of The Wonderful Wizard of Oz premiered. Ensterä's set is especially impressive, thanks not only to its abstract, geometric creativity, but also to its sheer expansiveness. When the main curtain opens to reveal Oz, you can feel the collective gasp from the audience as it takes in the scene. Reilly's bright color choices for the upstage cyclorama both contrast with and complement Ensterä's whimsical world, alternating in such a way as to suggest an ever-changing, cartoonish sky.

The creativity continues with Dunbar's costumes, which cleverly bring to life the many characters of Oz in ways that feel especially appropriate to the era. Particular standouts include the Yellow Brick Road, a trio of performers (Zamy Baumuller, Jordan Nabarette, and Autra Okeke) in bright jumpsuits featuring taxi motifs, and the Wiz himself (Nick Fichter), bedazzled in a feathery Mick Jagger-meets-Elton John getup complete with emerald-studded pumps. Against Ensterä's set and Reilly's lighting, Dunbar's wardrobe provides texture and depth to complete a three-dimensional tableau of color and style.

As Dorothy, Rebekka Bryant provides an exuberantly inquisitive character, her vocals nicely treading the line between R&B and contemporary musical theatre styles. As in the movie (both the 1939 Garland version and the '78 Ross adaptation of this musical), she's joined along the way by three companions, each in search of that one thing he most desires. For the Scarecrow (M'Kenzie Flakes), it's a brain; for the Tin Man (Cody Blount), a heart; and for the Cowardly Lion (Ja'Michael Darnell), of course, it's courage. The wicked witch (renamed Evillene and portrayed by Jessica Polk) is here as well, as is the ensemble of Munchkins, flying monkeys, and Emerald City citizens we've come to know. Intact are the iconic songs from the score, including "A Brand New Day," "Home," and, naturally, "Ease on Down the Road." 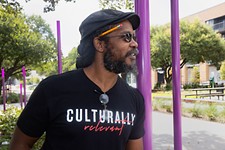 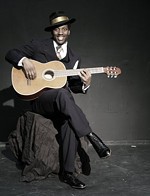 Robert Johnson: Trick the Devil
The ProArts/ACC co-production plays out like a Robert Johnson number: strong, sweet, natural, and full of longing