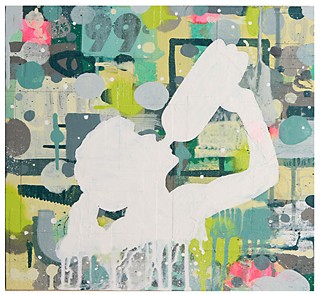 
New Jersey-based artist Neil O'Brien feels right at home at Common House. His lo-fi mixed-media paintings and prints share the same nostalgic Americana tone, muted Eighties color palette, dry texture profile, heavy design influence, and unexpected professionalism given low production value that the gallery has become known for. The exhibition is far from highbrow – no French theory or post-isms at work here – but it's not pretending to be that kind of show either, and just because it isn't doesn't mean that the works aren't thoughtful or intelligent. Playfulness simply happens to trump these other attributes for O'Brien. Though the exhibition is far from life-changing, there are moments that are certainly worth the visit.

It was so long ago is typical of those high points. A rusted frontier two-man crosscut saw hangs on the wall like those expected of an ol'-timey mercantile or themed restaurant. Across its long blade, written in red and white, reads the work's title. The text is simple, its message clear, but underneath that there are two subtleties at work: the first a lightly sardonic simplification of American yearning for the good old days, the second a quick-witted linking of the passage of time with the length of the rusted saw through the word "long." It's as though the blade stretches out as you read it in the same way that memory or history can as details fill in.

Drop invokes that same magic of linking action with physical form through wordplay and directional cues. Here, a bone-dry, lightly rusted metal panel about six by six inches hangs squarely on the wall from a long thread. A large cartoonish sky-blue drop is painted on the panel just past the termination of the string. Like It was so long ago, the work seems to move, to stretch out in front of the viewer's eyes, following the lead of the highly directional composition.

Other works seem to attempt the same method but miss their marks. Wild Hair, Roll on Babe, and Intake lack the same synchronicity of text, form, and composition necessary to bend reality in the same way as the previously mentioned works. Instead, these seem more appropriate as book illustrations or other supporting graphic design than stand-alone artworks.

The title image of the show, (I saw You) Chugging from a 2 Liter, is one of the stronger works, tapping into a more defined personal memory and concentrating the proverbial past tense that the rest of the exhibition seems written in. The dripping profile of a young woman drinking from an upended soda bottle is painted over a field of teal, green, gray, and pink overlapping shapes and symbols. The work is endearing, innocently voyeuristic, and has the capacity to conjure up parallel memories in its viewers.

As a whole, the exhibition is a bit loose; the works are tied in a strong way through similarity in style and tone, but their content and impact is varied. O'Brien has a strength in his sensitivity toward composition, and uncannily so, with regard to the written word both in title and in image, but the synchronicity that he flexes in his most successful works seem to stop at the frame's edge. I'm left wondering what an exhibition of his work would be like if he or his curators could extend that spellbinding effect across the gallery walls.