Sean Ripple on "Tom Sachs: Boombox Retrospective" and the rising role of the artist-curator 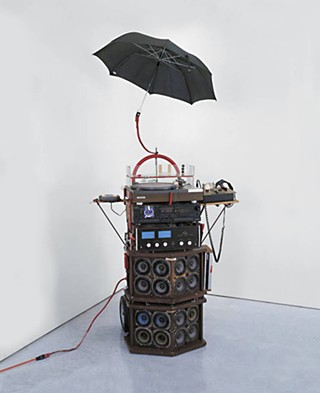 Entering the Contemporary Austin's Downtown location these days, one immediately sheds the notion of the quiet, contemplative art-viewing environment. Instead, viewers are met with a floor-to-ceiling sound system wired for 10,000 watts, loudspeakers doing their work in an orderly grid of plywood. Level settings are exposed on the right with a handwritten label (à la Samuel L. Jackson in Jackie Brown) reading "DON'T FUCKING TOUCH." This sculpture, Toyan's, is a strange mash-up of the inexpensive handmade and the pricey mass-produced, a hijacked cultural symbol in many ways quite out of place in the museum setting – and it's emblematic of the rest of the work in "Tom Sachs: Boombox Retrospective 1999-2015."

Conveniently timed for SXSW (and with collaborations in the works), the exhibition shows a slice of Sachs' practice specific to the realm of music and its orbiting topics of consumerism, expression, and co-opted culturally specific modes of communication. From the formidable Euronors, based on a Third Reich public address system, to the street-ready Guru's Yardstyle, complete with turntable, umbrella, makeshift hourglass, and loading dolly, the Jones Center is filled with multiple species of custom boomboxes, many live and wired to an output of playlists compiled by Sachs' friends and invited pop icons (Kanye among them).

"Tom is an artist that I saw as being a very good fit for Austin," says Sean Ripple, the exhibit's organizing curator. "I really like Tom's work because he's talking about the larger population – how different levels of culture and class communicate, how they relate to and play off one another."

It was Ripple's suggestion of Sachs for future programming and his clear enthusiasm for Sachs' work that led Executive Director Louis Grachos (who had worked with Sachs before moving to Austin) to tap Ripple as the lead in making "Boombox Retrospective" a reality. Grachos, Ripple, and Sachs jointly decided to exhibit Sachs' boomboxes as a way of acknowledging Austin's strong musical roots and linking in with SXSW.

Ripple selected stereos from a long list provided by Sachs, works he found important in the context of Sachs' overarching practice as well as in relation to the physical space at the Jones Center. The two worked together to site locations for the work and to collect and curate the show's cohesive audio component – a key element first suggested by Ripple. Some of the mixes most often played during the exhibition are products of his outreach. Playlists like those from Texas musician Chris Hrasky of Explosions in the Sky and Houston Rap author Lance Scott Walker became some of Sachs' favorites and added a local spin to the Contemporary's sonic atmosphere. While it may have been a bit ego-tamping to have his own playlist thrown out, Ripple takes comfort in having brought forth others that have taken center stage. Moreover, Sachs gave the responsibility of "playing the room" to Ripple – curator as DJ, selecting music from the approved playlists that respond to the viewers at any given time.

"The boombox itself is a force of liberation and a sign of authenticity. As it relates to a cultural thrust of a marginalized population, it can become an instrument of power," Ripple explains. "I idealistically identify with that as being important to a society of free speech – there's a contradictory, noisy, and disruptive body politic to it, for example, that I think is very American. The boombox as a symbol is not so simple." 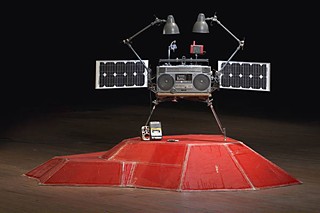 Ripple is not so simple either, and therein lie the reasons behind his unusually collaborative efforts with Sachs. Outside of his curatorial practice, Ripple is a visual artist in his own right. The conceptual foundations that he exposes when speaking of Sachs' work are not far removed from those he builds on in his own practice as an art maker. While their work is fundamentally different in physical form (much of Ripple's work is not physical at all, but Internet-based constructions or curious social experiments), Sachs and Ripple both address absurdities in consumerist culture within the framework of a broader social exchange.

Asked if he found overlap in their artistic interests, Ripple replies, "I do. I don't know exactly where they meet, but they do. I became interested in Tom's work because there is an evident busting-ass quality there that I admire. Inherently, the work ethic is one of the things that I'm most attracted to." Ripple admits to geeking out at Domy Books [now Farewell Books] with Domy manager and fellow curator/artist Russell Etchen over Sachs' publications. He cites Sachs' Space Program as the most obvious sign of that hard labor and its pull.

Space Program is an ongoing project in which Sachs and a hand-picked team produce re-imagined space expeditions loosely based on NASA missions and protocols. The program landed on the moon in Gagosian Gallery in L.A. with a built-to-scale Lunar Excursion Module and took samples of the lunar surface by drilling directly into the gallery floor. Euronors comes from the Mars landing at the Park Avenue Armory in NYC, and Ripple insisted on getting it for the Austin show. The project now includes corporate collaborations with Nike, Prada, and others (some appropriated as brands for ridicule in Sachs' works, e.g., Prada Toilet) to create lab coats, footwear, etc., for use in future expeditions.

Ripple is no stranger to acts of cultural reframing and brand appropriation himself. Recently, he turned the paradigm of the artist residency on its head. Instead of having an art organization or corporation sponsor a period of time for conducting research and producing work, Ripple undertook a nine-week program and exhibition of work in Target stores that was self-sanctioned rather than Target-sanctioned. His arrangements, constructions, performances, and interventions were "exhibited" on-site and documented in Target Residency-dedicated streams on Instagram and Facebook: products rearranged on the shelf to form humorous collages of packaged-based marketing; formal sculptures crafted out of display furniture posted with #sculptureforemployees; all the cereal boxes on an aisle reversed, creating a wall of nutritional information and ingredients. It leaves the viewer wondering which is the art: the act itself, the products in the store, or the documentation online.

"I wonder how much Target Residency is born out of the fact that I was working with Tom," says Ripple. "It's not a pure cop because I look at who I am and why I gravitate toward a Warhol or a Sachs, and there's something at play related to consumption, the mass-produced, and luxury. If there's any informing from working with Sachs that Target Residency yields, it's because we're operating from a common place."

Other Ripple works implement the same pirating and hijacking methodologies that can be seen in Sachs' work. Take Home De-automations, an installation tailored for the high-tech home that spins a functional and efficient system into one that generates an aesthetic environment rather than a practical one; television, kitchen appliances, thermostat, and shower, all working in poltergeist-ish concert. It's not a stretch to find similarity in the functional but over-the-top and impractical boomboxes at the Jones Center or in the pirate radio that's currently broadcasting at 94.3FM and which, according to Sachs (grinning mischievously), "has no association with the Contemporary Austin," but coincidentally coincides with his retrospective and is obviously authored by the artist.

Sachs' and Ripple's work on "Boombox Retrospective" is indicative of a shift in the art world, where traditional barriers separating artist and curator are breaking down. Things are less cut-and-dried, with curators making art and artists taking more agency in how their work is presented. In this new reality, artist-curators find a natural balance between enabling the artists they work with and curatorial control. That dynamic can make for less rigid exhibitions, something that may be more in line with the artist's ethos than the ethos of display. The affinity between Sachs' and Ripple's art is very much the source of their successful collaboration and influenced many aspects of this show's curation, from the selection of Sachs as an exhibiting artist to the choice of work shown to the timing of individual playlists.

"There's an inflated historical relationship with the artist getting annoyed with the curatorial voice over their work," Ripple says. "That sort of tension is about an art-historical voice imposing on pure being: creating, making, doing your thing. Someone's coming in and editing, and reducing. How annoying, right? I'd like to see more of these multifaceted roles because as a maker you can potentially be more sympathetic to what is being made. I come from an artist place, so I get really excited about the pure being side, the making side. I feel like it's less art-historical for me and just more ... more human."