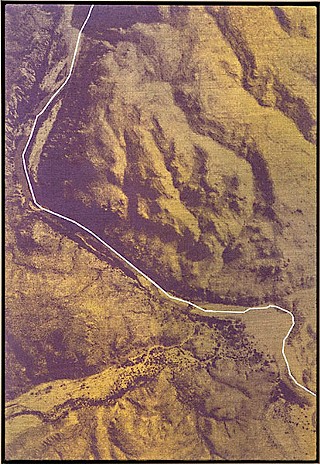 We all know at least one: that guest at the party who always brings up politically charged conversations but somehow masterfully avoids ever giving away his own position – a smooth talker, invariably sharply dressed, spinning each probe back on itself and laughing off any attempt to pin him down.

That may be the best way to describe both the strengths and weaknesses of "Border Theory," Tony de los Reyes’ first solo exhibition at Lora Reynolds Gallery.

The show consists of a number of very similar works, each based off satellite imagery of the Mexico-U.S. border. These vertical works on linen, double the size of an average piece of paper, are vibrantly and interestingly colored, each with a contrastingly geometric line jutting across the organic landscape. The line, of course, represents the border itself, but aside from a few questions about what is natural vs. what is man-made, there is no statement, no political commitment in one direction or the next.

When Reyes’ Border Theory series was first exhibited in L.A., it was warmly received by the press as a "daring foray" into nonreactionary images; others praised it for not being the "expected trash used to fulfill [the] Mexican quota to appease the city’s unruly anti-gentrification crowd." I get it, it’s bad form to be overly didactic in contemporary art. Nobody wants to be hit over the head with your proverbial shovel. But in this instance, it feels all too convenient that the works could just as likely be seen in the office of a bleeding-heart liberal or a hard-line conservative.

De los Reyes’ works are unquestionably beautiful and with matching metal frames noteworthy enough to mention in the press release, these works are ready to be sold. (I, admittedly, would love to have one myself, given the opportunity.) Regardless of that purely visual appeal though, the work seems intentionally and damagingly indifferent. Exhibitions like the Fort Worth Modern’s 2014 "Mexico Inside Out" have shown that contemporary art can be political without being trite, maudlin, or heavy-handed, and so while I very much want to be encouraging of Reyes’ move away from his formerly more confrontational works toward something with more subtlety and composure, I’m afraid that in his efforts he has traveled too far into purely neutral territory.