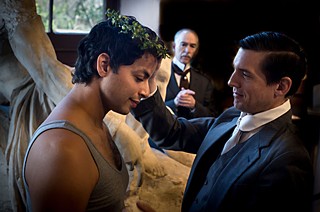 (l-r) Erik Mathew and André Martin, with Philip Goodwin in the background (Courtesy of Bret Brookshire)

Would you care to meet your younger self, the person you were at, say, half your current age? Would you want to talk about what you did or didn't do, what you read or didn't read, whom you should or should not have loved? Playwright Tom Stoppard may not, but he gives that rather Twilight Zone-ish opportunity to English poet A.E. Housman – he of A Shropshire Lad fame and one of the foremost classical scholars of the Victorian era – in order to explore Housman's intellectual development; the history, art, and mores of his time; and, perhaps most movingly, the love that Housman felt but did not express for a student he knew in his days at Oxford, Moses Jackson.

With the nimble inventiveness for which he's become known, Stoppard capers from the river Styx, where the aged Housman is preparing to be ferried to the afterlife by the underworld's favorite boatman, Charon, through his time at university, with an array of disputative dons arguing over Latinate tenses, to his encounter with Oscar Wilde, a figure whose flamboyance and openness about his feelings for men contrasted sharply with the repressed Housman's. The elder poet – is he truly dead or merely in a dream? – must face the choices he has made throughout his life and whether he can claim the path he traveled truly served him well. Austin Shakespeare, which enjoyed considerable success with its production of Stoppard's Arcadia in 2012, returns to the playwright for a second helping, and Artistic Director Ann Ciccolella uses the occasion to bring guest artist Philip Goodwin back to Austin. He played George to Fran Dorn's Martha in the production of Who's Afraid of Virginia Woolf? that Ciccolella staged at Zach Theatre in 2003. The "younger Housman" will be played by visiting Equity guest artist André Martin. Filling out the cast are Erik Mathew (as Moses Jackson), Nick Stevenson, Austin Shakespeare veteran actors Keith Paxton, Michael Miller, David Boss, Robert Stevens, Reginald Brown, Alison Stebbins, Brian Coughlin, and Chase Brewer.

The production also inaugurates a new initiative for the company. In tribute to a trio of notable activists who championed LGBT causes, Austin Shakespeare will launch the BCK Fund, honoring Bettie Naylor, Charles Gentry, and Karen Kuykendall, all of whom worked tirelessly for inclusivity on and off the stage. The fund will support theatrical productions with LGBT themes. A reception to raise funds for this project will take place Sunday, March 1, 1:45pm, in the AT&T Rooms at the Long Center, 701 W. Riverside.