For Belle Redux, Stephen Mills takes an innovative approach to Beauty and the Beast 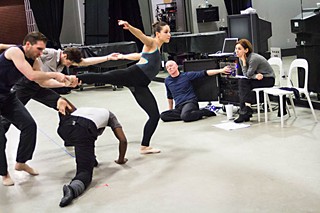 You know the Disney version, no doubt. Perhaps you know the Cocteau version, too. You may even know that late-Eighties version on the tube starring Linda Hamilton and Ron Perlman (or the Kristin Kreuk-Jay Ryan remake currently on the CW). But just because you're familiar with Beauty and the Beast in one form or other, don't assume that Ballet Austin's version is simply more of the same. This isn't another hoop-skirt-and-knee-breeches period retelling, heavy on the fangs and fur. There isn't a buckled shoe in sight, and you'll find neither hide nor hair of, well, hide or hair. For Belle Redux/A Tale of Beauty & the Beast, premiering this weekend, BA Artistic Director Stephen Mills has conjured a very different Beast – and Beauty, too.

Indeed, that was the charge from the entity that commissioned this ballet, 3M. Yes, you read that right. The multinational manufacturer that gave us Scotch Tape commissioned this work from Ballet Austin – not because of its love of dance but because of its interest in innovation. Dr. Joaquin Delgado, executive vice president of 3M's Health Care Business Group in Minneapolis, considers innovation – the act of improving something, making it more effective or engaging – integral to the corporation's success and way of working. A few years back, when he was heading 3M's Austin division, he worried that its distinctive value was being lost as more and more people used it interchangeably with invention, the act of making something new. Having seen Mills' innovative incorporation of shadow puppetry into his ballet of The Magic Flute, Delgado felt the choreographer would be an ideal ally for spreading the gospel of innovation, and so commissioned a ballet from Mills to that specific end.

This wasn't a challenge that Mills took lightly. "To be able to take an idea and expand it without eliminating it is not an easy task and is an art form unto itself," he wrote in a blog post about Belle Redux. But he felt that in La Belle et la Bête – as the story was titled when it appeared in France in 1740 – he had a tale that has inspired innovation from the start. Just 16 years after Gabrielle-Suzanne Barbot de Villeneuve published the original, Jeanne-Marie LePrince de Beaumont produced an abridged version that has become better known than the source. Jean Cocteau famously adapted it for film in 1946, then in 1994 Philip Glass composed an operatic score to be performed in concert with the screen version. The hit cartoon created for Disney by writer Linda Woolverton, lyricist Howard Ashman, and composer Alan Menken was translated from animated film to live-action theatre. And so on and so on.

In taking on this oft-told tale, Mills decided to strip it of many of its most familiar elements: the period setting; the enchanted objects in the Beast's castle; the woolly-headed, monstrous look of the Beast and his magical transformation back into a handsome human form; even the fairy-tale romance that provides for that change. In their place are darker elements, both figuratively and literally. The set and costumes by designer Michael Raiford are primarily shades of black and gray, evocative of noir thrillers, as is Graham Reynolds' tense, brooding score. Taking a cue from designer Alexander McQueen, Raiford outfits the dancers in stark, form-fitting clothes with futuristic flourishes out of some dark dream. The Beast is distinguished by a bright red vertical stripe running from his waist up his bare torso, throat, and face to the top of his head. He is less cursed than marked by life.

That's not to say that there is no love in Mills' adaptation. There is, and in its way may prove as powerful for audiences as those in other versions of Beauty and the Beast. Belle comes to love the Beast and chooses to stay with him after recognizing that she has her own beast within. "You might consider it an animal aspect or you might consider it a different facet of her personality," Mills has written. "And we all struggle with this dichotomy, and we can all relate to it. Beauty and beast. Day and night. Light and dark. Love and hate." It's a struggle that is always with us, no matter how we appear, and thus when Belle chooses Beast, he continues, it isn't "to escape or to be rescued – but to simply help make life's journey better. And that is beautiful."