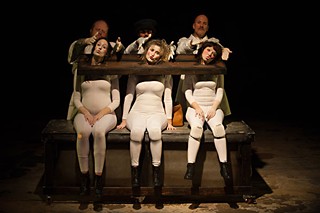 
So many things about Thr3e Zisters are remarkable. The cast is, without exception, talented and great to watch. Guest director Yury Urnov makes use of the deep but narrow Salvage Vanguard Theater space inventively in this story about the resurrection of the three sisters from Russian writer Anton Chekhov's play of the same name. Urnov is aided by Ia Ensterä's fascinating set design and Natalie George's lighting.

It's curious that playwright Lola Pierson writes in her program notes that much of American theatre feels "slightly removed," because Thr3e Zisters comes across, in sum, as cutting, surprising, engaging, and more than slightly removed. It vacillates between pure sensation – the men dragging their weighed-down sled across frozen tundra, the three re-animated sisters bickering from window to window, or actor Robert Matney nervously munching on a pickle – and critical commentary that's so intellectual as to require a bit of prior knowledge to fully appreciate.

The story is perhaps intentionally disjointed. Three men from Chekhov's play exhume the sisters Olga, Irina, and Masha with the idea of capturing and thereby owning their ideal women, but things don't go as they hope. There's the sense from the sisters that all this has happened before. In some scenes, the characters revert to a literal translation of the original Russian dialogue, which is as bizarre as it is poetic. The cerebral exploration of Chekhovian acting technique and literary style is balanced roughly with a gut-level dig at the portrayal of gender in classic literature and how or if women are granted a voice.

It's a beautiful, fascinating play. It is not an easily accessible zombie fest for mass audiences, but for those who have some experience with Chekhov, it's a gripping master's thesis on the survival of Chekhov's female characters. If you can, try to read Three Sisters before you go. Bonus points for reading it in the original Russian.

The performances are strong enough to deserve a second mention. The roles of the sisters are cast well – Heather Hanna as Olga, Caroline Reck as Masha, and SVT Artistic Director Jenny Larson as Irina – and the actresses prove themselves to be a great ensemble. Their physical work is very interesting, and whatever Reck's personal health regimen is, we should probably all adopt it, because she is terrifically nimble and dynamic for someone in her third trimester. The gentlemen of the cast also perform well; Noel Gaulin's physicality is always eye-catching.

And I commend Matney again for the pickle-eating. Eating a pickle is not intrinsically interesting to me, but I can honestly say that I could watch Robert Matney eat a pickle, or summarize Chekhov, or debate a return to Moscow, for even longer than the 65-minute runtime of Thr3e Zisters. His patience with awkward moments is lovely.