The Chicago troupe's dances, grounded in contemporary ballet, ranged from ceremonial to intimate to absurd 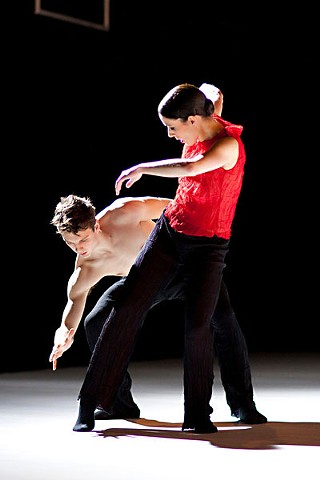 
With dances by Czech choreographer Jirí Kylián and Spaniards Nacho Duato and Alejandro Cerrudo, Hubbard Street Dance Chicago offered what you might visualize as a contemporary-dance "L" map: three lines, with distinct routes, all working within the same system and connecting at a stop called Nederlands Dans Theater, the Dutch company where each danced and choreographed at some point during his career. As performed by the youthful dynamos of Hubbard Street, the five works displayed roots in a contemporary, grounded version of ballet (its line and aplomb intact) and ranged from ceremonial to intimate to absurd.

Duato, who danced at NDT before becoming director of Spain's Compañía Nacional de Danza, was represented in "Gnawa," a 2005 work for eight male-female couples. It's one of those ballets that depicts an invented ritual, inviting us to reflect on the strangeness of our own social rites, but in "Gnawa," a tribal or provincial interpretation is smartly undercut by sophisticated costumes by Modesto Lomba: black gowns for the women, gold pants for the men. In Duato's characteristic arrow-swift and supple movement, the dancers offered precision as though it was an hors d'oeuvre, passed with Champagne. The year "Gnawa" premiered was the same year that Cerrudo joined Hubbard Street, after dancing with NDT2 (NDT's troupe for early-career dancers) and before becoming Hubbard Street's resident choreographer. In his "Cloudless" (2013), Ana Lopez and Jacqueline Burnett explored the possibilities of eight limbs and two perceptions to music from Nils Frahm's album Felt, which Frahm recorded by placing microphones inside the piano and playing, using the damper, late at night. The lighting remained low, but the mood switched to jubilant for Cerrudo's "Pacopepepluto" (2011), a trio of inventive solos in which men, often with bare, chiaroscuro-ed backs to the audience, bounded and preened through Dean Martin songs.

The two works by Kylián, whose three-decade tenure at NDT as artistic director and resident choreographer ended in 2009, held up as the most experimental on the program. In "Sarabande" (1990), six men fall from the hems of empty, hoop-skirted gowns, which hover above the stage, and explore, as though from an alien planet, what it is to be men: screaming, running, panting, and hiding inside their T-shirts. A different kind of exploration occurs in "Falling Angels" (1989), as eight women jut, wiggle, and slice to Steve Reich's "Drumming: Part 1," playing with contained momentum. Only here did the Hubbard Street dancers come up short in presence, but if I began to waver, soloist Jessica Tong brought me back, her eyes arresting with the same sharpness as the angles of her knees, elbows, hips. I noticed, during bows, that she was also the one wearing the reddest lipstick. 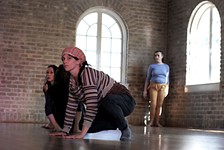