In The Bowie Project 2, everyone is Bowie, and nothing stays the same

Andrea Ariel (left) and Adam Sultan (at mic) lead the dive into Bowie in 2014's The Bowie Project: A Rock and Roll Soundpainting. (Courtesy of Kirk Tuck)

I swear I heard it: the opening riff of the David Bowie song "Fame," just tangible before it dissolved into wavering keyboard and guitar, punctuated by jazzy crashes from the drums. The sounds came from the six members of the Super Creeps, the Bowie tribute band, who were arranged in a semicircle, with dancers Alyson Dolan and Steve Ochoa on the floor in the middle. In front of the group, Andrea Ariel, in black save for the magenta tinge of her pixie cut, repeatedly lunged forward, making eye contact with a musician or dancer before communicating with gestures that sometimes looked like dance – Andrea Ariel Dance Theatre is producing the show – other times like the motions of a conductor, and still others like the proselytizations of a cryptic mime. She brought the band together and allowed it to fall apart, silenced and drew out individual instruments and vocals, elicited counting, laughing, and even invective: At one point, she gleefully silenced the music and directed the band to deride the dancers ("Aw man, we should just go take a break." "Why do dancers always insist on wearing black?").

Ariel was conducting a rehearsal for The Bowie Project 2 using Soundpainting, a 1,200-gesture sign language for leading improvised performance, with the "paint" made from Bowie songs that Ariel and Super Creeps frontman Adam Sultan had painstakingly divided into "palettes" of material. In addition to the song palettes, there are palettes of movement and text, excerpted from interviews given by Bowie. In The Bowie Project 2 – a reprise of 2014's The Bowie Project: A Rock & Roll Sound­paint­ing – these elements will be manipulated as clearly as with puppet strings, pulled like taffy, and, overall, royally screwed with by Soundpainting conductors. The Bowie Project 2 employs the original performers, who have gained more Soundpainting experience in the past year (Ariel and Leese Walker, a Soundpainter-actor in the show, took part in last summer's International Soundpainting Think Tank in Spain) and added some new material, making this an even deeper dive into Bowie.

After the invective session, Ochoa responded, in silence, to Ariel's direction to "extend technique," the gesture for which looks like "movie" in charades, only with the fingers of one hand splayed and wiggling. He leaned over a chair, his upper back arched over the seat, and curled his legs in the air, like the stamen of a flower. The chair tipped, but Ochoa's musculature so controlled the fall that it didn't make a sound. It was clear, though, on his face, that he hadn't meant to do it. The sounds that Ariel elicited next from the band were distorted and heady, as if in anti-gravity.

By basing a whole Soundpainting performance on pop songs, The Bowie Project is pushing the boundaries of the language, all with the blessing of its inventor. Composer and jazz musician Walter Thompson developed Soundpainting for musicians in the Seventies, then expanded it for actors, dancers, poets, and visual artists in the Nineties, but The Bowie Project unearths new questions. To answer some of these, like how to respond when a gesture results in faster movement for the dancers but not faster tempos for the musicians, Ariel will consult with Thompson via Skype. Other questions are less technical, more experiential. In rehearsal, Ariel accused Sultan of "stab-freezing" (which means to stop and stutter the last sound or movement, like a skipping CD) when she hadn't yet finished making the sign (fist over palm). "No, I just sounded like it," maintained Sultan, demonstrating on his guitar the pulsing notes that happened to be in the palette he was playing. Which is to ask, if the palette you're working with in a Soundpainting happens to have the quality of stab-freezing, but you weren't intentionally stab-freezing and the conductor hadn't made the stab-freeze gesture, were you really stab-freezing?

Much of the fun of the first Project was disorientation. Perhaps to ensure this, much of the show moves backward in time, from 1977 to 1969, retracing Bowie's early career from Low to Space Oddity. Most of the time, Ariel explains, "the song as a whole doesn't roll through, but it emerges." Based on Sultan's conversations with those who saw last year's Project, these flashes of familiarity cause tension. "You don't know what's happening, but you start to latch on to a familiar sound," he says. "You're constantly on edge, but you're coming back to a melodic place." Since you can't exactly sing along, you get comfortable with being lost – albeit in familiar surroundings.

Sultan is experienced with fielding responses to sometimes bewildering performances. Besides the Bowie band, he plays in the Queen band Magnifico and covers Zeppelin as part of Led Rocket, but in none of them does he impersonate the band members. "It's very wry. Kind of like, remember this little trick? It's more personal, more interesting, less commercial." He also performs and records as the surly feline in the sado-vaudeville duo Mistress Stephanie & Her Melodic Cat, and in 2013, he played a future version of himself in Steve Moore's play Adam Sultan, reckoning with consecutive deaths as he outlived his family and friends.

Good covers – and most agree that the Super Creeps do good covers – reveal the coverer's relationship with the music, which is maybe the most intimate of primary sources. Although Ariel has logged months of research, focusing on Bowie's interviews and videos, she nods to Sultan's interior perspective: "You can afford to be a little bit more intuitive with it, because it's kind of like in your bones." In good covers, aspects of character, affectations, and songs are illuminated or magnified, disproportionate to the whole. There is the bittersweet achievement of getting so close to someone else's masterwork. "It's sort of a heartbreaking irony," says Sultan, "that this is one of the best bands I've ever been in."

In the cover bands, Sultan endeavors to play the music more than to play the characters. But in the Project, each cast member is, in some way, Bowie. "It's like if you took Bowie and exploded him into 12 people," says Ariel. By a mid-January rehearsal, actors Walker and Nolan Kennedy and guitarist Rolf Sturm – all members of Strike Anywhere Performance Ensemble, a collective based in New York City – had rejoined the group. Walker and Sturm, in the downstage corners of the studio, Soundpainted sections simultaneously, each working with different members of the ensemble. As Kennedy invoked an insecure Bowie, commenting obsessively on Sultan's confident, performer-persona Bowie, it became clear that the Bowie they all were playing was a conglomeration of Bowie the public figure, Bowie the artist, Bowie the Work.

In the movie Being John Malkovich, some wayward folks, including John Cusack as an unemployed puppeteer, discover a portal into the brain and body of Malkovich, who plays himself. Similarly, in The Bowie Project, the dancers, actors, and musicians find a portal to Bowie the Work. And when they get there, just like the folks who wreak giddy havoc on poor Malkovich, they start messing with him (or it). Kennedy's Bowie, Soundpainted by Walker, became desperate, trying to find meaning in the words of Sultan's Bowie, Soundpainted by Sturm. But it was all impossibly fragmented, like when Malkovich himself goes into the Malkovich portal and everything is Malkovich-Malkovich-Malkovich. After Walker and Sturm stab-froze the Bowies into extreme stutters, leading into the song "[ch-ch-ch-]Changes," Walker placed one hand over her heart, the sign showing she's conducting the actor, and gently – somehow (how hard it must be to keep track of the gestures; I was looking at the compassion in her face) – guided Kennedy-Bowie into silence.

That probably won't happen in performance, as each show will likely reveal different interiors and depths of Bowie the Work. But watching any Soundpainting unfold is liberating and energizing, as is, Ariel tells me, being inside one. Sultan, who is on the receiving end of the Soundpainting for the entire show, admits, "I actually wish I could be on both sides." 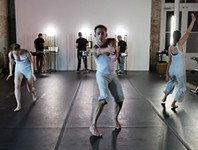 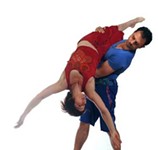 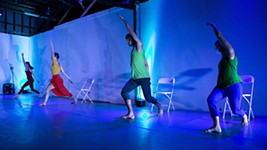