The Mountaintop measures MLK's journey for civil rights, but says we still have a ways to go 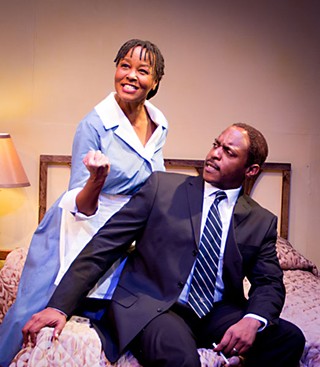 That's the portrait painted by Katori Hall in her compelling 2009 drama, its subject being Martin Luther King Jr. on the last night of his life. Taking her cue from the final speech given by the civil rights leader – the one which ended with him telling the crowd that he, like the Biblical patriarch who led his people out of Egypt, might not live to enter the "Promised Land" with them, but that he'd seen it from the mountain's top – the playwright carries us deeper into the dark and stormy night following that portentous address, probing MLK's humanity, mortality, destiny, and legacy in the modest confines of Room 306 of the Lorraine Motel.

Hall begins by stripping off the saintly robes that have accumulated on King in death, taking pains to reveal the man in Martin: craving a pack of Pall Malls and impatiently peering out the door for Ralph Abernathy to bring it to him, emptying his bladder in the toilet, shedding his shoes and wincing at the odor of his own "stanky" feet, appreciatively eyeing the figure of the maid who brings him some coffee. This is an MLK with appetites and desires, and in Austin Playhouse's staging, under the steady hand of Producing Artistic Director Don Toner, Marc Pouhé conveys them with such earthy gusto that, however much talk there may be of the spiritual – and in time there will be much – we never lose sight of this King as bound in flesh and blood. He is no monumental martyr cut from marble, but someone human-sized and mortal – almost painfully so.

This becomes clear as King's extended conversation with that maid – to whom there's more than meets the eye – delves into matters of greater consequence than smokes and MLK's mustache. They speak of the fight for civil rights, race relations, hatred, violence, the threats against King, and the death that inevitably awaits him, and whatever the subject, the word "fear" surfaces like the thunderclaps that break in on them scene after scene. It is the thing that blacks and whites share, King insists: "We all scared – scared of each other, scared of ourselves. Fear makes us human." Later, he even says that fear "has become my companion, my lover," and at one point, we see the depths of that intimacy when one of those thunderclaps robs him of breath. As his King falls back, clutching at his collar, the terror in Pouhé's face is almost unbearable, and his panicked repetition of the phrase, "I can't breathe" adds a chilling resonance to the moment.

That isn't the only scene where this play, rooted in the past, summons the present. As talk turns to the time after King's death and what that "Promised Land" might look like for the people who have fought so hard for equality and justice, Hall turns the play's gaze forward and creates space to consider MLK's legacy. In a striking sequence that breaks free of the play's naturalism, Carla Nickerson – who, as the maid, Camae, has gracefully shapeshifted her way through shyness and flirtatiousness, cynicism and hope, censure and comfort, the sacred and the profane – turns poetic cantor and chants her way through the 45 years of American history since MLK's assassination, both the civil rights triumphs and tragedies. One is left with a powerful sense of both the progress we owe to King and how much of the battle is still left to be fought. When it concludes, a newly impassioned MLK speaks to the audience, his future, of the Promised Land, imploring us, like Moses, to finish the journey he couldn't. "Your time is now," he says. And in that plea an echo can be heard that puts truth to its urgency: "I can't breathe."