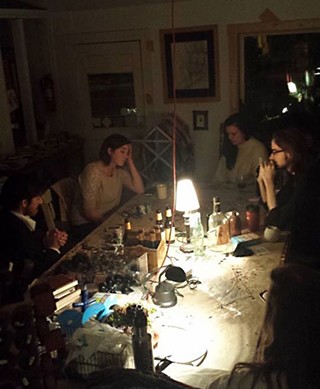 What we talk about when we talk late at night: the cast of The Insomniac's Ball (Photo courtesy of Bottle Alley Theatre Company)


If it weren't for the small "Insomniac's Ball" sign on the fence, you might feel a little odd to be opening the tucked-away gate that leads to the yard. But before you've even reached the porch, the front door opens wide with a hearty greeting from playwright/director Chris Fontanes. You're invited inside the house, given a handmade program, and told to help yourself to the cooler of assorted beverages in the corner. As you proceed to an open chair situated along the perimeter of the living room, you shuffle through torn playing cards strewn about the floor.

In the center of the room, seated at a table enveloped in beer bottles, are three characters playing cards. An eruption from one of them kicks off Fontanes' original play, the first installment of Bottle Alley's current season "based around an introspective study of the present." The setting and premise might sound a bit Sartre-esque, and the reference indeed evoked through the intimate communal environment in which we find ourselves. What unfolds over the next hour is an existential parable of sorts, with character names like "Bad News" and "December," and occasional streams of consciousness emitting from the dialogue. It's a play with the theme of regret and how given circumstances and personalities factor into the equation that yields it.

For me, the most successful element of the evening was the experience created by Bottle Alley. Plenty of plays have been produced in houses before, but site-specific works continue to provide variety for the frequent theatregoer, as well as new contexts for traditional plots and ideas. Fontanes, along with cast members Amber Hales, Tim Olivares, Ariel Gilman, and Justin West, establish a scenario that very much feels like a house party. We've all experienced those long conversations that extend into the wee hours of the morning, whether we're seated at the kitchen table or on the living room couch. Bottle Alley brings this environment to life in multisensory ways (though, be forewarned, that one of these is through the use of cigarettes). Though at times meandering, the script does also include some solid dialogue and moments between characters. The casting choices don't always seem to align especially well with the archetypes suggested by the script, but the four-person ensemble does an admirable job of moving the script along despite some overacting for the tight quarters.

Presence, the present. Awake or asleep, Bottle Alley's Ball provides a unique context for experiencing both. 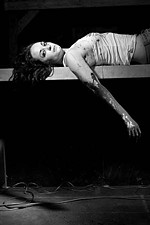