"A film is like a battleground," the late Samuel Fuller is heard to be expounding, playing himself in Jean-Luc Godard's Pierrot le Fou. "There's love, hate, violence, action, death. In one word, emotions."

This says a lot about Fuller's art. Be it on a printed page or a strip of celluloid, Samuel Fuller wanted to leave blood. He did not make films – he made tour de forces: the Korean War's only contemporary chronicle The Steel Helmet, classic film noir Pickup on South Street, offbeat Western Forty Guns. When studios slashed his budgets viciously, he seemed to revel in still startling, as with psych ward classic Shock Corridor or the reformed-prostitute-in-a-town-without-pity miniature epic The Naked Kiss. The terse prose style he developed writing for Hearst's yellow sheets in the early 20th century served him well when he went to long-form print, be it crime fiction à la The Dark Page or his World War II memoir The Big Red One, basis for his 1980 film masterpiece. As Fuller acolyte Martin Scorsese exclaims from the cover of this, his unpublished-in-English final novel, "A great, great, great storyteller."

The final tale he tells is no less intense. Set in what appears to be Nineties NYC and France, Brainquake deals with the solitary world of bagmen: lone figures transporting money for organized crime. They are expected to have no relationships, no ties, indulge in neither alcohol nor women, never talk, and never look inside the bags they carry. Paul Page, over 10 years an exemplary bagman despite some odd mental disorder (which, in some ways, makes him even better at his job), has no trouble adhering to the code ... until he witnesses the making of a mob wife into a mob widow. Falling for the femme fatale, he systematically breaks every rule. Then it's not just his life that unravels. 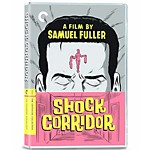