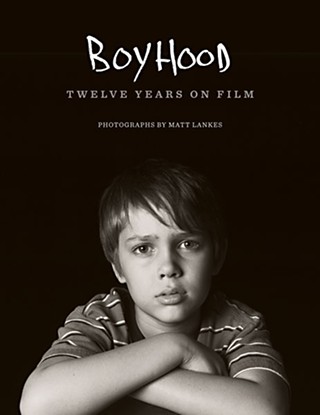 Boyhood, released in the summer of 2014, was shot over 12 years, a period during which the cast of Richard Linklater's film, centered around a young boy and a broken family, aged in real time. This incredibly ambitious project was shot during one week each year. Linklater took notes from cast members about their own lives and distilled their input into the script as time marched on and the film evolved. Now there's a book, Boyhood: Twelve Years on Film, with 214 color and black-and-white photos by Matt Lankes covering the film's production between 2002 and 2013, with commentary from Linklater, producer Cathleen Sutherland, the film's stars, and the photographer. The book's large format – 9.25 inches by 12 inches – makes for a sumptuous presentation without being doorstop-heavy.

I liked this book from the first beautiful black-and-white portrait of Linklater, still boyish at 54 and whose floppy hair calls to mind the bowl haircuts that my kid and probably your kid had when they were 8 and 9 years old. Here it is again on Ellar Coltrane as Mason, the film's young protagonist, in years two and three ... the buzz cut of the following year ... those, uh, unfortunate haircuts of teen years ... and finally, he's a young man with chin whiskers and guitar-playing friends, ready to seek his way in the world.

Patricia Arquette, who portrays Mason's mom in the film, shares some of her own losses (the deaths of her parents, divorce) in her commentary, while Lankes' portraits invite us to parse the difference between the fictional character and the real. We're allowed to see Arquette when she was closer in age to that sexy babe of late film noirs and as a middle-aged single mother with a strong resemblance to someone we know from our kids' play dates, neighborhood meetings, trips to Whole Foods.

"I am growing up," says Coltrane in the first commentary, and on the facing page is Lankes' portrait of Coltrane as Mason as an 8-year-old, year two of Boyhood. "The first time I watched the movie, Mason's point of emotional development essentially led into my current state and every time I watch the film I am a little farther from that person."

In a pre-release article about the film, Linklater related a tense moment after IFC heard his initial pitch for an untitled 12-year project. "What happens in the film?" they asked, to which he replied, "Well, not much, really," or something similar, the true meaning of which is in the shrug that moviegoers have come to expect from Linklater. What comes through in the pages of Boyhood: Twelve Years on Film is that, actually, quite a lot happened, on both sides of the camera.