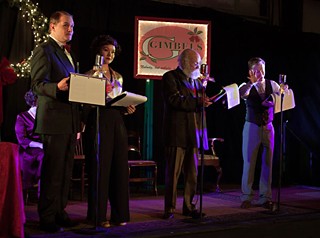 On the air!: The cast of A Miracle on 34th Street Classic Radiocast (photo courtesy of Kimberley Mead)


It's the most wonderful time of the year: that time when Austinites scamper about in search of Christmas cheer, and theatre-makers do their best to stage classic yet innovative productions that help create a winter wonderland in our sunny city. One holiday staple for many is a viewing of A Miracle on 34th Street, the heartwarming tale of Kris Kringle, the department store Santa Claus who just might be the real deal. Though many have a soft spot for the 1947 film (or perhaps even the 1994 remake), it's a safe bet that they've never seen an iteration quite like Penfold Theatre's. The Old Settlers Hall in Round Rock is dressed to transport audience members to radio studios of yore: black curtain backdrops, a Foley table, three vintage microphones, and even a light-up 'Applause' sign. The actors play (or voice, really) a myriad of roles, and even do double duty providing the majority of the production's sound effects. This mostly bygone form of entertainment lends an added air of nostalgia to the story while still managing to create a fresh feel for the familiar material. It's pretty plain to see why Penfold might choose this route (after three years of successfully staging It's a Wonderful Life in the same fashion): fewer actors, no costume changes, blocking, or set pieces to contend with. But just because this production errs on the side of reader's theatre doesn't mean Penfold is cutting corners.

When subtracting the flair that elaborate production elements might contribute to a show, we're left relying on the story itself and on the actors to, in this case, serve as Santa's elves, building the Christmas magic. The adaptation by Nathan Jerkins, Penfold associate artistic director and director of this production, adheres closely to the film and translates well for this project; but, as the saying goes, the key to a successful production lies largely in casting, and the strong casting is integral to this Miracle's success. This production especially would fail if not for the incredible talent of Sarah Marie Curry, Brock England, Julie Linnard, and Joe Hartman – vocal chameleons all, using only aural variations to create the majority of the characters in this charming tale. The only actor portraying the same role throughout is Dirk Van Allen, who makes for a convincing Saint Nick – so convincing, in fact, that you can't help but pity the jolly old soul as he's almost institutionalized by a bunch of hardhearted, faithless Scrooges.

The production cleverly includes "commercial breaks," funny bits that serve as shout-outs for some of its sponsors while maintaining the vibe of a traditional radio program. These references to local businesses were a lovely representation of the overall feeling of community that this show promotes. The audience seemed to me a mixture of many types: the very young child sipping hot chocolate and cheering for Kris Kringle, the elderly couple perhaps reliving Christmases past, those for whom the film version may be a longstanding tradition, avid theatregoers, and locals looking for a unique way to celebrate the season were all among those in attendance. As Kris Kringle reminds us, "Christmas isn't just a day, it's a frame of mind," and Penfold's well-executed production encourages the very sense of togetherness to help us get there.