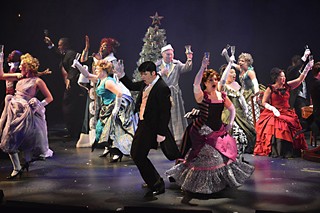 Party like it's 1899: Scrooge's nephew, Fred (Michael Valentine) and his wife (Kelly Petlin) lead the dancing at their holiday shindig (photo courtesy of Kirk Tuck)

Be it by cartoon ducks, Muppets, or players at a community theatre, seeing some rendition of Charles Dickens' A Christmas Carol has become an all but inescapable holiday tradition for most. Inescapable shouldn't necessarily translate as uninteresting, though, so long as the take on the material is fresh, the cast talented, and the correct emphasis placed on the play's sentimental moments. Zach Theatre's adaptation of this holiday classic certainly has these first two elements, although director Dave Steakley's approach to the material may just be too fresh – so much so that it leaves little room for the audience to emotionally accompany Scrooge on his arc from humbug to herald of holiday cheer.

Steakley took inspiration for his treatment of this tale from Baz Luhrmann's popular film, Moulin Rouge!, which intermingles period settings and costumes with contemporary music and showmanship. So, instead of your usual, well, Christmas carols, this production's plot unfolds largely between beltings of Bieber and Beyoncé. However, David Bowie and Madonna's upbeat tunes lend themselves far better to a turn-of-the-century Parisian nightclub than Ace of Base does to a holiday gathering in Victorian England. For Carol, I found the anachronism distracting; it seemed that every time a scene was on the verge of striking an emotional chord, it would be interrupted and undercut by the musical selection. One such moment of stifled sentiment occurred when Belle, Scrooge's former fiancée, breaks off their engagement, accompanied by a slowed-down version of Whitney Houston's "I Wanna Dance With Somebody," which was met by laughter from the audience.

Still, what the production may have lacked in vision, it made up for in sheer talent. Michael Valentine as Scrooge's kindhearted nephew, Fred, is every bit as charming and cheerful as he should be, while Scrooge himself, perfectly portrayed by Harvey Guion, is equally crotchety and unapproachable. As Belle, Sara Burke brings a contagious energy to each of her scenes. In an attempt for added diversity, the production features a Hispanic Cratchit family: Paul Sanchez as Bob, Alejandra Murga as Mrs. Cratchit, Gustavo Gomez and Marianel Marquez as Pedro and Marta, and William May as the adorable yet ailing Tiny Tim. While I didn't feel that changing the Cratchits' ethnicity made any significant impact overall, this is a talented group, creating an endearing family dynamic while providing glimpses into some Mexican holiday traditions. Also, Marquez is an incredible young talent; her version of Beyoncé's "Halo" gave me chills, despite any misgivings about the song choice. Kenny Williams croons soulful, nostalgic tunes to perfection as the Ghost of Christmas Past, also injecting comedy into the role. Jacqui Cross gives a beautiful performance as the Ghost of Christmas Present, though the other role she plays – Mrs. Dilbert, Scrooge's housekeeper – is somewhat troubling. As written for this adaptation, the role sometimes skirts the line of an outdated stereotype – an unfortunate contradiction to the open-minded, multicultural attitude the production hoped to embrace.

As Austinites have come to expect from Zach, the production values here are top-notch. Susan Branch Towne contributes elaborate period costumes with a smart modern flair. Bob Lavellee's set design is equally impressive, framing the stage with frosty cogs, clock faces, and a rotating floor piece that all emphasize the ephemerality of time. While these elements are fantastic, they simply aren't enough to convince me that a modern approach truly works for A Christmas Carol. But maybe I'm just a Scrooge when it comes to that sort of thing. 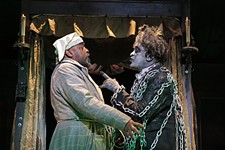 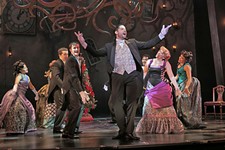 A Christmas Carol
Dave Steakley's musical version abounds in great voices, but it may drown out Dickens with songs