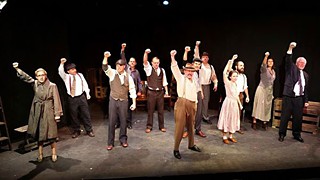 As I sit waiting among my fellow audience members – waiting for the arrival of Lefty, for the impending strike meeting, for the performance at hand to begin – I take note of the mannerisms of the gentleman in the seat to my right. The brim of his hat sits low over his eyes as he bobs his head occasionally to the preshow music. I wonder to myself whether he might be part of the cast or, like me, is a ticket holder. I return my thoughts to the stage, an empty space with plain, black walls in which the brush strokes are highly evident. Some chairs sit around the perimeter, utilitarian objects here and there. A back storage room, perhaps.

And then the meeting begins, and the audience is totally immersed. We're part of a taxi drivers' union planning a strike, and not everyone is in agreement. Sure enough, the man to my right is one of the first to speak up, inciting union leader Harry Fatt (the ever-versatile Michael Stuart), who shoots back that my row neighbor is a "red." The play is "stylistically set in the Great Depression," as noted by director Benjamin Summers in the program (cleverly designed as a leaflet) and, he asserts, gave "rise to a style of political and socially-conscious theatre that American audiences had not previously experienced."

Throughout the show's numerous vignettes, Street Corner Arts' ensemble delivers some remarkable acting. Of particular note is the aforementioned Stuart, who shifts in chameleon-like fashion among three disparate roles. But perhaps an even greater triumph here is the balance of the company as a whole; there's not a weak link to be found. Each actor is fully invested, and not one performance distracts from playwright Clifford Odets' socially charged through line. Summers and his cast have achieved a unified, action-packed product that resembles a finely oiled machine with all its cogs working in rapt precision.

As "immersive" theatre continues to sweep our commercial theatrical landscape with such works as Sleep No More, Here Lies Love, and others, it can be easy to forget that there were precursors to the current trend, Waiting for Lefty being a prime example. We, the audience, become performers without uttering a word. It's been nearly 80 years since Odets' play was first produced by the Group Theatre, and the current rise of experiential, interactive theatre might be read as a bit of history repeating itself. Many thanks to Street Corner Arts for its homage to a way of producing and experiencing theatre that de-centers its audience while at once providing fine acting from a highly impressive cast.