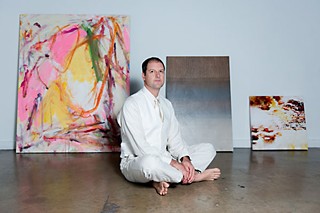 If you want to understand what led this versatile and accomplished performer to create Feast of My Heart, the ambitious multidisciplinary project opening Dec. 11 at Salvage Vanguard Theater for which Phelps not only performs eight personally commissioned solo works by eight different playwrights but wears the producer's hat as well, well, you need first to know that he was hungry.

Not as in needing food in his body – though that does play a part in this story, but more on that later – rather, as in needing a specific kind of theatrical work in his body, a kind that he hadn't really done in years but which had been a staple in his creative diet during his first years in Austin.

See, Phelps came to town when theatre here was undergoing a generational shift. In the early Nineties, a wave of new companies broke onto the scene and began staging work that was unlike most of the drama that had been mounted here before. It bucked convention and broke the rules and left a mess in its wake. It was mostly original, irreverent, and flagrantly theatrical in inventive ways. And while the troupes responsible for this work were all small and poor, what they lacked in resources they more than made up for with the fierceness of their independence, dedication to new voices, ambition, commitment, and desire to connect with audiences of their peers – that is to say, people under 30.

Phelps launched his local career as a core actor for Frontera in its early years, taking key roles in productions such as The Swan, in which he played a bird that literally metamorphosed into a man; Weldon Rising, in which he was the tart-tongued transvestite Marcel; and Daniel Alexander Jones' Blood:Shock:Boogie, in which he got to portray, believe it or not, Julia Child. But it wasn't long before he began applying his physical and emotional flexibility to roles in productions by other companies, too – Pterodactyls for Subterranean Theatre, Tilt Angel for Salvage, the touring version of Lipstick Traces for the Rudes – and in these and other projects, Phelps found opportunities to connect and often collaborate with some of the most adventurous writers to emerge at the time: Lynn, Lisa D'Amour, Erik Ehn, Ruth Margraff, Dan Dietz, Zell Miller III, C. Denby Swanson. The material produced by these playwrights varied widely in style and sensibility, and yet Phelps felt something similar when he ingested their words.

"There's something nonlinear about the way that they tell stories that is very physical for me," says Phelps. "Their work – I feel it physically, and that is as important to me as the story being told." When he, his wife, choreographer Margery Segal, and their son Javon left Austin for Vermont in the early Aughts, Phelps left behind that career as a performer, and though he resumed it upon the family's return a few years ago and has stayed quite busy with creatively gutsy work – Spring Awakening at Zach Theatre, There Is a Happiness That Morning Is and Detroit with Capital T Theatre, touring with The Intergalactic Nemesis, co-creating "The Sound That Shook the World" with Heloise Gold – he's felt something missing. "I wanted that challenge of getting text that was physical," he says, of taking in words rich with depth and meaning and poetry.

So Phelps did the only thing you can do when you have a craving for a particular food: You go get yourself some. He contacted playwrights that he knew from his first dozen years in Austin and asked each, "Would you write a solo piece for me?" The only stipulations he gave them were that the piece be between eight and 18 minutes in length and that it respond to this question: What does it mean to you to engage in an act of compassion? Seven responded in the affirmative – D'Amour, Ehn, Jones, Lynn, Margraff, Miller, and Swanson – and Phelps filled out an eighth spot with two gentlemen who may have come late to the rebel theatre party but who have embodied its maverick spirit, sense of risk, and messiness in everything they've done since they showed up in Austin in 2002: Josh Meyer and Matt Hislope of Rubber Repertory.

(Eight is a number of particular significance to Phelps. He was born in the eighth month on the 18th day, and when he began to conceive of this project, he chose a Tarot marked with the number eight. He connects eight to compassion in Buddhist thought, and, of course, when you turn an eight on its side, you get infinity.)

Phelps was drawn to the theme of compassion by the rampant insensitivity and partisanship that has society so polarized today. "It has to do with what's going on in the world," he says, "with pushing people away and judging people and not having tolerance and understanding of what other people are experiencing. That keeps pushing people to extremes. Theatre and art is a place to bring people together," and works focused on compassion would help people gain a sense of what it is to be in someone else's skin, to feel what that person is going through. And, he adds, "these writers have the capacity to understand that – all of the artists involved in this project, to be honest, which has come through more and more in this rehearsal process."

By "all of the artists," Phelps means the eight directors he chose to stage the eight solo pieces and the eight visual artists he invited to provide works inspired by the playwrights' texts. While he waited for the scripts to come in, Phelps drew up a list of directors that he wanted to work with, some of whom he knew well (Hyde Park Theatre Artistic Director Ken Webster; Vicky Boone, who's been retired from Frontera and theatre in general since 2001; his wife Margery), some of whom he didn't (playwright and founder of the Living Room storytelling series Amparo Garcia-Crow, Rude Mechs company member Lowell Bartholomee). Once he read them, Phelps began pairing plays and directors. "Then I was like, 'I want to work on this with this person,'" he says. "It felt intuitive. Like [ScriptWorks Director] Christi [Moore and I] have never worked together, really, and I thought, 'I'm really curious what she'd do with a Ruth Margraff piece.'" (Shawn Sides of the Rudes and SVT Artistic Director Jenny Larson are also directing.)

Feast's visual-art component sprang from Phelps' first exposure to the East Austin Studio Tour. He was charged by "all of the energy around all of the visual art that was happening and the amount of people coming out to see it and excited about it. I felt like this needed to be a part of it, too." Phelps extended invitations both to individuals who are, as he says, "really in the art world" (photographer Leon Alesi, painter Stella Alesi, photographer Sarah Bork Hamilton, painter Carl Smith) and some with one foot in the performing arts/film worlds (improviser Shannon McCormick, actor Tim Mateer, musician Gretchen Phillips, videographer Lee Webster). "I chose people because I admired their work," says Phelps, "and I was curious as to what they'd do with these particular texts. What would visual artists do with a nonlinear text? How would it feed them?"

Feed. Feast. The Sustainable Food Center. (Did I mention that Phelps is donating half of all ticket sales to that institution, as well as hosting an information booth in the SVT lobby that features interviews he's conducted at farmers' markets about "why food is such a vital part of creating community"?) You don't have to talk to Phelps for long to hear food pop up in the conversation. It's a subject near to his heart (and you know what they say about the way to a man's heart). "It really has to do with my relationship with my grandmother," he explains. "She grew up in Kentucky, and I hung out with her quite a lot as a young kid, and I would drive with her to deliver Meals on Wheels. She was active at the community center in her neighborhood, putting food together, and she did that at her church. She made amazing Southern cooking at home in Cincinnati. I saw her creating this amazing community around her, and it was centered around food."

He isn't the only one in that Nineties generation of Austin theatre who spoke the language of food and connected it to community. So many embrace it that you could mistake the theatre for a kitchen. "Erik talks a lot about that," he says. "Erik and Daniel and Laurie [Carlos]: 'Let's just all potluck. We'll get all these people together in the room, and then we'll just start having ideas, and something is gonna come out of it.' My dream is that everyone involved in this project could come together, and we could just potluck. I asked everybody: 'What can I offer you in return for what you're giving me on this project?' And when I asked Colin Swanson, that was what Colin wanted. She was like, 'I just want all of us to get together and have a potluck together.'"

A full reunion (and communion) of these comrades from Theatre Past wasn't on the menu for this project, although Phelps plans to host an afternoon event on Saturday, Dec. 20, with several collaborators coming in to discuss compassion and community and the arts. Still, he has hopes that a future project might allow for such a breaking of bread.

For now, though, the only shared feast will be the one inside Phelps' body, where all these texts from his old friends are mingling. And how do they feel in there? Is Phelps being nourished in the way he expected? On the one hand, he says, the sensation is "very familiar in the way that I made a lot of work in the Nineties." But on the other, "I'm a different person now. I'm a parent now, and I've been teaching children for the past 13 years, and I have a different sense of presence. And It feels weird to say, but I feel much more in touch with my body. So taking risks is good. I need to do that right now. So it feels really great to be working this way." 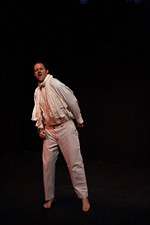