From the cleared living room of their humble bungalow on Gonzales Street, Julia V. Hendrickson and Anthony B. Creeden organize and exhibit pairings of local and national artists. If their debut show is any indication, Permanent.Collection may not be the most conceptually accessible gallery in town (novice viewers be warned), but for those with a bit more arts experience under their belt or those who are new but who don't mind asking a question or two, this exhibition space promises a good mix of the heady and the quirky.

Alex Chitty's works are placed in four groups around the gallery: 18 small "photo drawings," one pile of pinkish photos and bent Plexiglas, and two thick, raw-edge wood shelves holding three curious objects each. Material, form, and composition seem to be the main considerations here, each object being interesting but vague and unreadable; a piece of walnut with repeated circular divots, a textured chunk of concrete with the strange addition of wool, a painted piece of steel balanced on a slack cloth belt, etc. Chitty seems to be working more in the realm of uncomplicated aesthetics than in conceptual depth. She is a florist of things, creating arrangements of objects that relate to each other in purely formal ways. The work is pleasing, yes; eccentric, certainly; but life-changing, no, and I don't think it's meant to be.

If Chitty's works relate to the name of the new gallery by offering an eccentric historian's collection, bringing together the products of unknown (imaginary) cultures and presenting them out of context as many museums do, then Aaron Meyers' work relates by offering a line of products from the future – the new collection.

Meyers exhibits six works: three sculptures from his luxury mouse wheel series (patent pending ... seriously) and three works on paper. Each of the 3-D printed wheels have been designed by Meyers in a strange optimization of the current standard. Instead of the usually flat cylinder, Meyers has added a curve to the running plane bulging inward. This tailored shape balances the need for stability for the running mouse with the as-yet-unaddressed need for the wheel to remain clean. Mice and rats defecate while they run, and this makes for some pretty nasty wheels and paws. With Meyers' design, the shit never hits the fan, flinging naturally to the wayside instead.

I'm skeptical about how this relates to the world outside Meyers' studio, Permanent.Collection, and PetSmart, but the sculpture's other elements do enough for me to stay intrigued. Meyers chose to support each of the wheels with unique welded-steel bases, peculiarly shaped acoustic tile (à la drop ceiling), and brightly colored acrylic that pairs well with the printed plastic of the wheel. The shapes used throughout the works reference modern luxury design heavily, but the one material that recontextualizes the work is the acoustic tile. Not only is this material notoriously hard to work with, but it completely relates to the office and the classroom. That link creates a strange metaphor between luxury, the efficiency/inefficiency of work culture, and not having to step in one's own droppings. What a new rat race.

The conversation here about high-brow hoarding, collecting, display, and curation is equal parts Chitty, Meyers, and Permanent.Collection itself. The gallery frames both artists as playing dual roles: Meyers an eccentric inventor and Chitty a hoarding anthropologist. The result is an experience somewhere between an art museum, history museum, and science museum, reduced to the scale of an Austin abode.

A closing reception will be held at the gallery Sunday, Dec. 14, 3-6pm. 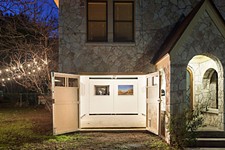