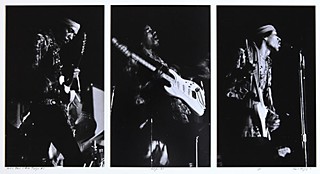 
The story behind the photographs is compelling enough on its own: In the spring of '69, a Duke University art student takes his Nikon down to a rock concert in Raleigh, works his way near the stage, and, using only available light, captures a guitar legend at an extraordinary moment in his career: six months after the release of his most commercially successful studio album and on the first date of a new American tour, two months before his original band dissolves, and four months before he makes rock history at Woodstock. Seventeen months after the North Carolina concert, the guitarist himself is rock history: dead from drug-related asphyxiation at age 27. But the shots of him at Dorton Arena go mostly unexamined for another three and a half decades. It isn't until 2005 that the photographer finally combs through the images in detail and finds them remarkable enough to begin a long process of testing chemicals and papers for printing them, then produces a handful as fine-art prints in his home darkroom. Several more years go by, and a retired rocker just happens to open an art gallery specializing in photographs of musicians in the photographer's hometown, and these long-neglected images find a place on its walls.

The subject, the circumstances, the passage of time, the unlikely connections – they combine to make for a terrific story. But when you're face-to-face with the actual images, the saga of how they came to be hanging at the Modern Rocks Gallery in Austin, Texas, 45 years after they were taken, recedes into the background. What comes to the fore is Jimi – Jimi at the peak of his powers. Jimi riding the wave of No. 1 success for Electric Ladyland. Jimi working his left-handed voodoo on that wicked Stratocaster. Jimi, forehead swathed in a silken scarf, eyes closed in intense concentration. Jimi lost in the music, leaning back, then doubled over, then up again, body twisting to the right. He is instantly recognizable and – there's really no other word for it – iconic. So much so that as you're looking at him, no matter what music may be playing in the room, the stereo in your head reflexively drops the needle on "Killing Floor" or "All Along the Watchtower" or "The Wind Cries Mary."

But there's more to what the young Robert Hewgley caught on film that long-ago April night than the face we identify in a purple haze of nostalgia. He caught an artist in the act. Exchange the features we know for another's, and you still see the drama and power of a musician in the throes of creation: in the tension in the face, the grip upon the instrument, the stance, the blur of movement. The effect is enhanced by the way the older Robert Hewgley has carefully printed the images, with Hendrix swallowed in shadows so thick and inky as to seem supernatural. Reproduced in print or onscreen, they may not appear so, but in person they have the texture of sable and the enveloping blackness of a starless midnight. This is Stygian darkness – which makes this Hendrix Orpheus in the underworld, playing for all he's worth to bring his foxy lady back to the land of the living.

Sure, the world already has many images of Jimi Hendrix. Still, we're fortunate to have these rescued from obscurity. In their craft and artful presentation, they cast a powerful spell, one almost as mesmerizing as the music made by their subject. 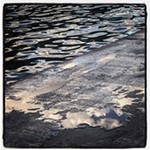 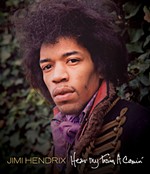 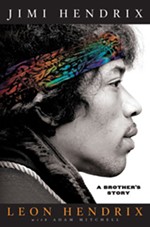