In Bill Wittliff's debut novel The Devil's Backbone, an 1880s boy known only as Papa recounts his search across the Texas Hill Country for his wayward mother and his own narrow escape from his father, mean Old Karl, who is hot on his tail. It's a wild, picaresque ride with a cast of colorful characters with whom Papa finds the sense of family otherwise missing from his life. Chief among them is Papa's stand-in parent Calley Pearsall, who may or may not be both an outlaw and a hero. "Good Stories gonna land on you too," Pearsall advises Papa. "They travel in pairs the Good and the Bad together and depending on what you do with em they gonna steer your Life one way or the other."

Add to that a pair of cruel Mexican boys named Pepe and Peto who bring out Papa's dark side but ultimately teach him a mini-lesson in tolerance, and it's clear why the novel has drawn comparisons to Mark Twain's The Adventures of Huckleberry Finn. But there's more magic at play in Wittliff's world with o'Jeffey, an imposing African-American seer who refuses to reveal the whereabouts of Papa's mother, and Bird, a blind, prematurely born orphan whose bird-shaped birthmark is a mirror into the souls of all who view it.

Papa fights off his loneliness by living in his own mind, where the ghostlike "Shimmery People" dwell and he can escape into his Walking Off in My Head Days. But it's his interactions with this string of colorful characters that make The Devil's Backbone a joy to read. Wittliff's screenwriting background shows in the way the story marches forward from one adventure to the next with little time for the reader to catch more than a breath. In the hands of a pessimist, Papa's world is an often bleak place, but Wittliff's able pen creates instead hope and humor. As Miz Choat, who adopts Bird, tells Papa: "That just the o'human Heart for you. Not never no telling where it might jump up and go. Sometime don't go nowhere at all, just set there like some o'Possum don't know if it's alive or dead. Another time might fly around everwhere they is like some o'crazy Bug and land on ever tree they is or maybe just on that one most special tree in the World and no other. That's the Lucky Heart." 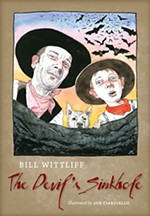