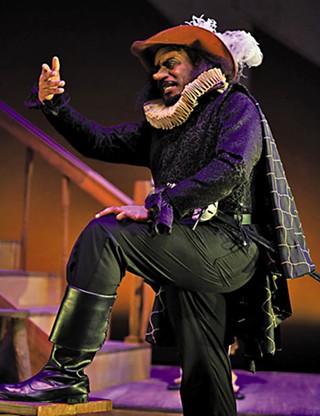 
Running time: 2 hr., 45 min. Rivaling the intensity and diverse offerings of Cyrano de Bergerac is a feat not easily achieved. This play is the 1890s equivalent of a summer blockbuster, featuring beautiful verse as the framework for an enthralling tale that intermingles war, comedy, and what is arguably one of the more tragic love triangles ever penned. Based loosely on the life of the 17th century French dramatist of the same name, Edmond Rostand's fictionalization follows its title character through duel after duel – be it literal sword fight, verbal sparring, or his constant struggle to be recognized for more than his unfortunately large nose. From battles afield to battles of wit, Austin Shakespeare's production, under the commendable direction of Ann Ciccolella, effectively showcases the many charms of this fine piece of theatre.

It takes a big presence to don the big nose, and the inimitable Marc Pouhé exudes the same finesse in the role that Cyrano displays with his sword. Pouhé, however, does not suffer the same misfortune as his character – that is, overlooking him is never an option. As is typically the case with an actor in a title role, much of the production's overall impact rests on Pouhé's shoulders. Those who saw him bear a similar load when playing Othello in Austin Shakes' production last February will be unsurprised that he once again rises to the occasion, displaying his immense skill with verse as well as his incredible versatility as a performer.

Crucial to a provoking Cyrano is Roxane, Cyrano's cousin and love interest, played by the talented Amber Quick. It's evident why Cyrano would fall for this radiant Roxane: Quick brings a natural charisma to the role, injecting charm and energy into each of her scenes, deftly handling both comic and dramatic moments. Her likability paired with Pouhé's passion makes it all the more heart-wrenching when this Beauty and the Beast-esque tale doesn't have a Disney ending. Because, beautiful though his love for Roxane may be, poor Cyrano's homely outward appearance simply falls short in comparison to the handsome cadet, Christian (Keith Paxton). Upon learning of Roxane and Christian's love for each other, and that Christian wishes to woo her but lacks the wit to do so, Cyrano agrees to write letters to Roxane on Christian's behalf. Paxton's performance in this scene expertly captures Christian's inner conflict and suspicions of Cyrano's intentions, while laying the groundwork for the play's famous balcony scene (maybe not the one you're thinking of). That scene – a standout moment as written, but especially in this production – was far and away a personal favorite, highlighting the supreme skill of these three actors as Cyrano prompts Christian with the perfect poetry to win the woman they both love, entrancing Roxane and audience alike.

Unlike Cyrano himself, the production elements are quite handsome. Leslie Ann Turner's set design, consisting largely of projections onto a backdrop, enhances each scene while allowing for seamless transitions. While William Meadows' sound design is fitting, it sometimes proved a tad distracting during the production's tenser moments. As is generally the case with Austin Shakespeare, Talena Martinez's gorgeous costumes crossed the t's in this production, while Allison Lowery's wigs dotted the i's. And of course, Cyrano would be nothing if not for Tara Cooper's believable prosthetic nose work.

At the play's tear-jerking conclusion, the ill-fated Cyrano bemoans his misfortune, proclaiming that "it is [his] life to be the prompter everyone forgets." Austin Shakespeare's production, however, is far from forgettable.