The two little words come out of the abuela's mouth, and the first flies upward, the pitch high and lilting like a wren taking wing, and just when you think that this is an unqualified expression of agreement, the second attaches itself to the first like a stone to that bird's leg and brings the sentiment crashing to earth in a terse, low declaration of dissent. "Ayyyye ... no." As uttered by Martinique Duchene-Phillips early in this Teatro Vivo production, the unexpectedness of the reversal and abrupt shift in both her voice and countenance (from sunny accord to head-shaking approbation) provokes laughter, and so it does whenever the same phrase is spoken by Leah Luna as her sister Maria and Eva McQuade as her sister-in-law Mague. Those minute monosyllabic opposites, how they're said, and the comic effect they engender matter so because they capture something important in Liz Coronado Castillo's play and this staging of it: the contradictions within us and within the way we relate to our families. Yes, we love the people in them, but no, we don't like what they say or do sometimes, and we can shut them down when we don't approve of their behavior.

We see that play out in lightly comic fashion when the women are alone together, chatting about la familia and speculating about the boyfriend granddaughter Alicia (Lori Navarrete) is bringing home from college. One will spout a firmly held opinion on, say, the most virtuous kind of Latino, and the others will initially appear to agree ... only to do an abrupt about-face and slam the door on that notion. But it takes on a more serious tone when the "friend" accompanying Alicia turns out to be no boy at all. Her name is Cathy (Patricia Eakin), and adding insult to injury for Alicia's elders, she's blond and an Anglo. If you had to love a woman, they ask, couldn't she be a Latina? Aye, Alicia, but no! The setup threatens to turn the play toward stormy domestic drama, but Castillo keeps the dark clouds away with a trio of benevolent drag queens who aim to do for Alicia what a more literal fairy did for Cinderella: work their magic to give her a "happily ever after." The flamboyant vivacity and theatricality of Gemini Dai as Starkisha, Althea Trix as Starlinda, and a seductively commanding Kelly Kline as fearless leader Zereda add a buoyancy that keeps the proceedings from sinking into grim reality. (Though a farcical plot device involving another friend masquerading as an over-the-top curandero and the older women dressing "butch" doesn't hurt, and director Ricky Ramón does his part to keep it all aloft with a brisk pace and light tone.)

The play contains its own contradictions. It clearly wants to empower Alicia with regard to her sexual identity, but once she's taken the bold step of introducing Kathy to her abuela and tías, Aye, No! gives her little more in the way of agency. And it never quite settles on "aye" or "no" where magic is concerned, seeming to approve of it when it involves the fairy drag queens but mock it when it's about the older women's faith in a mystic healer. That said, Aye, No! is first and foremost a comedy, one that Castillo has carefully crafted to sell a serious message through laughter. If we can find humor in the little blind spots in our behaviors that she exposes — as when Maria complains about Americans being fat while picking away at a bag of Cheetos — maybe we'll more willingly acknowledge the larger ones and see them for what they are.

And sometimes contradictions need to be embraced. "I may have been born a little white boy," insists Starkisha at one point, "but inside I'm a big black woman." She's wrapped those polarities in a big ol' bear hug, and I'm inspired to do the same for Aye, No! 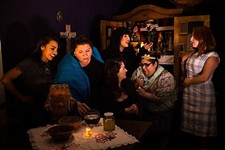 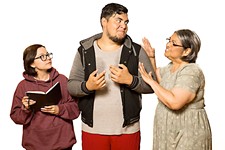