20,000 Austin kids are happily learning to make positive changes in their lives through Creative Action 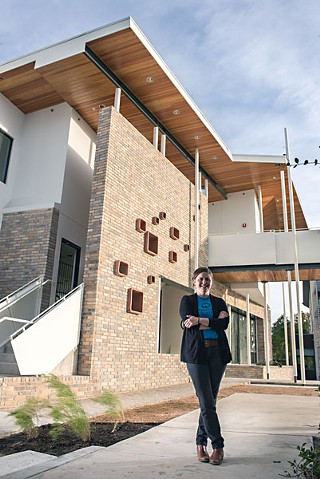 Head's up, Austin: Some artists you've never heard of are teaching your children to build puppets and stand up to bullies; write plays and empathize with strangers; make stop-motion animation and become leaders.

Or maybe you have heard of Creative Action, formerly Theatre Action Project, most likely from its afterschool programs, which offer a mix of creativity classes, homework help, and time for active play.

Or its in-school plays and talkbacks on issues like dating violence and bullying.

Or its teen programs, like the Changing Lives Ensemble conducted in partnership with SafePlace. Or Outside the Lines, an ensemble for LGBTQ teens and their allies.

Maybe you saw CA artists this summer, knocking on doors in a low-income housing facility, saying, "Come on out and do theatre with us! Sure, bring your cereal, and, yeah, pajamas are okay!"

That's CA in a nutshell, that last one. Karen LaShelle, who has led CA's extraordinary growth since 2003 – in which time its annual operating budget has mushroomed from $40,000 to $2 million – says, "Bringing joy to schools and neighborhoods is really, really critical to what we do. And [it's] part of why so many people come to Creative Action, want to be a part of it, and stay: It's a very fulfilling thing to be a part of."

For a group that every year works with 20,000 Austin-area kids, teaching them not just arts but also confidence in their ability to make positive change, Creative Action is surprisingly little-known. But with a new $3 million building opening in East Austin this week, it will soon be harder to ignore.

I met LaShelle – a small, precise woman in her 30s, with freckles and a disarmingly wide smile – on the sun-dazzled concrete where that new building was taking shape. In search of a cool, quiet place to talk, we settled in the lobby of the next-door PeopleFund, another organization in this "Social Profit Village" (more on that below).

As LaShelle spoke, it became clear that CA puts equal weight on the "creative" and "action" portions of its mission – or, as she puts it, their work is not just teaching arts but "more about whole child, really helping them to find out who they are, how they can help create positive change."

CA's in-school program serves the most students, around 10,000 in 400 classrooms last year. But in terms of depth and intensity, CA's afterschool program is the largest, serving 3,500 students for over three hours several days a week.

The majority of CA's students, 85%, are from low-income schools. But at the same time, says LaShelle, counting them off on her fingers, "We go to St. Stephen's, we go to St. Andrew's, we go to Trinity Episcopal." Charging fees for afterschool programs in higher-income communities allows CA to offer the program for free at schools in lower-income neighborhoods. In Creative Action's evening programs, making theatre about cyberbullying, dating violence, and homophobia turns teens from different backgrounds into close-knit families. LaShelle says one of CA's "key guiding principles is creating a place where everyone feels like they belong." Pale blue eyes grow brighter as she adds, "A place where, you know, a blind student, a lower-income student from a rural area, and an affluent student from a private school are all writing a play together. And at the end, that's where you do hear a lot of stories about people's minds opening up and learning about each other's life experiences. It's kind of the anti-clique, these programs. We don't do cliques."

If CA programming sounds like a live-action Afterschool Special, I'm explaining it wrong. "I remember when I was in high school," LaShelle says, wrinkling her nose. "We did these – I don't remember what they were called, but they were these terrrrible plays about STDs and suicide and drug abuse. I mean, they could not have been cheesier. That's really not what we do."

Instead, "it's kids talking about what happened to them. Within Changing Lives, you might hear from a student who says, 'On the first day of school, I showed up and there was a group of kids I didn't know, and they threw me against a locker and they stole my backpack.' You're hearing that; you're not hearing someone say, [cheery voice] 'Don't be a bully!'"

In other words, CA uses art's greatest moral power – its ability to stretch your imagination into empathy for strangers – to help children find their own solutions to problems like bullying. It's trying, LaShelle says, to "give kids an opportunity, through a character, to sit in a situation and feel it, and: 'Oh!' To inspire them to want to be a part of social change or stop bullying or whatever, because it taps into their heart."

LaShelle herself is an Austin native who, after earning a BFA in theatre from Illinois Wesleyan, moved to Chicago to make a theatrical career. She was at the Northlight Theatre, helping to cast and direct shows and working with well-known actors when "someone asked me if I wanted to be a mentor for a program in the west side of Chicago, where we were working with young girls to help them write original plays. And it was when I was working on that that I was like, 'Yeah. This is what I really want to do.'"

That took her to New York University's Gallatin School, where she designed her own master's program in community-based art. Back in Austin, she volunteered to help start the first afterschool program for the then-tiny Theatre Action Project, a venture founded in 1997 by four University of Texas graduate students doing theatre-based work on school violence that won nonprofit status in 2001 – just in time for the economy to tank. Donations dried up. But by 2003, when LaShelle came on as a volunteer, the economy was looking up. Within six months, she was TAP's first full-time employee.

At that point, they were working out of a 150-square-foot space in the Austin Groups for the Elderly building. LaShelle laughs, recalling "our first boxes for our staff. I was eating some cereal and was like, 'This could work as a box!' I just pinned them to the wall, so people could put their papers in there."

But soon, even larger rental spaces couldn't handle the organization's explosive growth. Programming was squeezed into rooms cadged from libraries, churches, and other nonprofits. Then, in 2010, the organization submitted a proposal to win a donated plot of land in East Austin, part of a "Social Profit Village" conceived by philanthropist Will Meredith and his parents, Lynn and Tom – a project that included the Sustainable Food Center and PeopleFund. Its proposal won, and during the ensuing capital campaign (the building is 90% funded), LaShelle says, "we really had an opportunity to get our organization in shape. We went through a name change [to Creative Action], we more than doubled our budget, we've really crafted our vision."

In fact, this fall, CA has 24 full-time and 50 part-time employees. LaShelle estimates that CA employs 75-100 local artists a year. "I think there are a lot of people that are able to stay in Austin and be working artists because they're working for us," she says.

CA receives just under half of its funding from donations, including the National Endowment for the Arts, Texas Commission on the Arts, and the city of Austin, as well as local foundations, corporations, and individuals. The rest comes from earned revenue, including school district contracts and fees from higher-income parents.

The new building, designed by Tom Hurt Architecture, has its grand opening on Nov. 15. At 7,500 square feet, it's "not a huge space, but for us it's going to be a lot bigger," LaShelle says, than the 1,600-square-foot "hodgepodge, ad-hoc, ramshackle" space CA's in now. The upstairs, with its slanting roof and tall windows, will house administrative offices and prep rooms for teaching artists, who for the first time will be able to meet regularly and exchange ideas. Downstairs are four classrooms, some with floor-to-ceiling windows, that will house a morning pre-K program, a daily afterschool program, and evening teen programs; and a workroom "where we can actually get out a saw and some bamboo and really paint and get our hands dirty." ("We do a lot of parades.") It's a long way from cereal boxes pinned to the walls.

Even before the building was done, CA was working to "be a good neighbor, have authentic relationships with people around us, and for the neighborhood to really see us as an asset," says LaShelle. A prestigious NEA "Our Town" grant for creative placemaking will help. With that $75,000, Creative Action will bring arts activities to community events, offer free programming for neighborhood kids, and create an advisory council of community members. It will also paint a mural on the back of its new home "drawn from oral histories and stories from the neighborhood." To that end, CA has created Color Squad, a new mural-focused teen ensemble whose members will help gather the stories and work with the mural artists.

Based on neighborhood feedback, CA will also add some programs for senior citizens, which could be anything from portrait painting to memoir-based playwriting, hat-making classes to quilting. Above all, she'd like to "find ways to connect [the seniors] to the students," perhaps even having some older people volunteer in the afterschool programs. "I just think we'll be able to bring a lot of joy through it," says LaShelle. She smiles past me, seeing something I can't, not yet. "I really get that sense, that it will be a very joyful opportunity." And joy is right at the joyful heart of Creative Action.

The grand opening for the Center for Creative Action will take place Saturday, Nov. 15, 1-4pm, at the center, 2921 E. 17th, Bldg. B. For more information, visit www.creativeaction.org.