The biggest name here is undoubtedly Fred Armisen. Now famous for Portlandia and Saturday Night Live, the Mississippi native gave Austin a sneak preview of his comic sensibility during SXSW 1998 when he shot a series of faux interview clips that remain YouTube faves. Known more for sketch work than stand-up, Armisen's a master at seizing the moment.

Representing Austin's own fertile comedy scene is reliable stand-up Chris Cubas, along with celebrated improv/sketch collective the New Movement, which has been known to turn festival grounds into an impromptu performance space.

One of FFF's most intriguing prospects is Rob Gagnon's One Hour Comedy Festival, which promises to pack an entire comedy fest into a single set, the host channeling such favorites as Stoner Comic and Some Asshole With a Puppet.

Silicon Valley cast member Thomas Middleditch is a UCB veteran who's amassed acting credits in projects ranging from TV's The Office to Martin Scorsese's The Wolf of Wall Street, as well as a variety of alternate personae that crop up in his stand-up act.

Pakistani-born Kumail Nanjiani remains one of the sharpest and most visible products of the booming L.A. nerd comedy community. He's had considerable success as an actor and currently co-stars on Mike Judge's HBO sitcom Silicon Valley and hosts podcasts The Indoor Kids and The X-Files Files, but it's on stand-up stages that Nanjiani's really in his element. 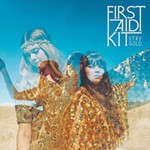