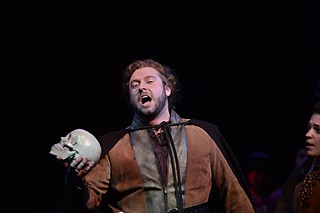 If all those ads for Verdi's A Masked Ball have you wondering just what Austin Opera is and what happened to that other company with those two words in its name – the one that's been producing Verdi and Puccini and Mozart and all those other music-drama heavyweights for more than a quarter of a century, well, there's no real mystery. The companies are one and the same. With the opening of its 28th season, the former ALO has simply dropped the "Lyric" from its name.

The change is in line with similar moves undertaken by some local arts groups in recent years, a modification made to reflect a shift in institutional identity. This one isn't as dramatic as when the Texas Fine Arts Association rechristened itself Arthouse or the merged Arthouse and Austin Museum of Art became the Contemporary Austin. (But then, those organizations were making such sharp turns in direction and focus that breaks with their former identities were warranted.) Think of this more like the Zachary Scott Theatre Center slimming down to Zach Theatre several seasons back. The organizational leadership hasn't changed, and neither the kind of work that's being produced nor its quality are different, but within the institution there has been some serious self-examination – a review of its mission, goals, and perception in the community. As time and Austin's growth had left fewer people knowing who Zachary Scott was, the adoption of what was already a common shorthand for the theatre's formal name made some sense. Going with just "Zach" played off both the rock-musical aesthetic of Artistic Director Dave Steakley's signature work and the informal nature of the city itself.

With Austin Opera, however, the reasoning for revising the name is almost the reverse: going more formal rather than less – at least in the sense of sophistication and professionalism. In the opera world, "lyric" describes a very specific genre, one decidedly less grand than the grandiose spectacles that most people associate with the form: your Puccinis, your Verdis, your Wagners. The smaller scale and romantic bent of the typical lyric work suggest a lighter, less challenging kind of opera, and if that's right there in the name, the implication is that that's the organization's specialty and focus. From there, it's just a short step to assuming that the company is more modest in size and maybe less ambitious in its goals. While it's true that Austin Lyric Opera was founded as a smaller regional company in a mid-sized city, the organization has always pushed itself in its professional affiliations and repertoire, and it has grown and developed as Austin has. Now that the city is almost twice the size it was in ALO's first season, with a much more cosmopolitan populace drawn from cultural capitals around the globe, the possibility that potential audiences might take that "Lyric" in the name to mean this company restricts itself to small-scale stagings of Gounod and Massenet is a bigger issue than it was when you could count the skyscrapers Downtown on one hand.

What the organization wanted was a name without limits. After a difficult decade, in which its artistic ambitions and growth were repeatedly frustrated by economic woes – for every triumph like the U.S. premiere of Philip Glass' Waiting for the Barbarians, there was a financial crisis that undercut its forward momentum – the opera is back in growth mode. The 2011 sale of the company's Lake|Flato-designed headquarters on Barton Springs Road resolved the debt issues that troubled it for years, and subscriptions have been on the rise since the 25th-anniversary season, according to Artistic Director Richard Buckley. That helped fuel the enthusiasm of the board of trustees on the creative front. "This board really wanted to move forward artistically," Buckley recalls, so last December, at a retreat led by Opera America President and CEO Marc Scorca, it crafted an eight-point vision of artistic excellence for the company. In the coming seasons, Austin Opera would: pursue new productions (i.e., ones with sets and costumes generated locally instead of rented from companies in other cities), produce operas by American composers (returning to the tradition established by productions of Carlisle Floyd's Susannah, Jake Heggie's Dead Man Walking, and the Glass Barbarians), mount world premieres, develop an alliance with the University of Texas (notably the Butler School of Music and Department of Theatre & Dance), support young artists, bring in more name artists, and produce a concert series (Heidi Melton, a rising star among Wagnerian sopranos, is already inked to open next season with a concert). With such a bold agenda, the last thing this company needed was a middle name hinting that it was amateurish, low-key, and content where it is.

No, this company is definitely intent on going places. In fact, Buckley is so charged by this new energy that, though he's just marked his 10th year with the company, he's extended his contract for five more. So if he seems to be conducting A Masked Ball at a quicker tempo than usual, it may be that he has one less word weighing him down and is eager to see what's ahead for Austin Opera. 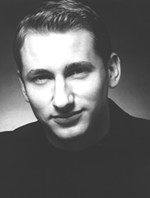