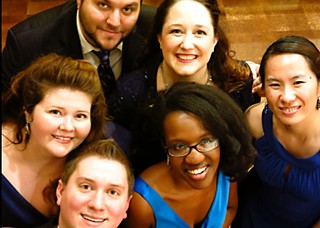 
At first glance, it appeared to be your typical concert setup: grand piano at center, lid at half-stick. But what spanned the void between lid and shell was anything but standard: a full-bodied, frightfully foreboding spider web. "Is this concert going to hell?" one might have wondered. "Or to High Estate?" Ensemble Cameranze may have queried, a twinkle in its eye.

The title of this concert, which focused on the dark side of Romantic music, was excerpted from Edgar Allan Poe's "Lenore," which opened the evening in a dramatic interpretation courtesy of actor Joe Hartman. Hartman's clearly enunciated, straightforward readings wove together the program's musical offerings, mirroring the web woven throughout the piano. Other writings by Schiller, Cazalis, Lermontov, Shakespeare, and Du Bois provided an interesting and varied connective tissue that prevented musical works from bleeding into one another.

Liszt's Valses Oubliées Nos. 1 and 3 provided the first musical moments, interpreted with economic angularity by pianist Nikki Birdsong. A haunting duo of waltzes appropriate for the evening, these were apt choices for an opener, if perhaps interpreted less in the spirit of Romanticism than one might expect. Nevertheless, Birdsong was consistent in her overarching choices. She would return to the piano later in the concert with colleague Joyce Wu for a four-hand rendition of Saint-Saëns' famous Danse Macabre, played admirably but with a certain politeness that didn't evoke the dramatic, driving tempo that one associates with the soul of the piece.

The highlight of the program for me was Mussorgsky's Night on Bald Mountain, performed at the organ by guest artist Jean Farris Fuller. Fuller's negotiation of complex registrations and timbres created a dynamism of stark contrasts, a hallmark of Romantic-era composition. The organ pedals boomed and bellowed in all the right places, creating an ominous effect reminiscent of the old theatre organs of days gone by. Though a few finger slips were evident here and there, this was the piece that most exemplified the Romantic spirit of the composers represented.

The cornerstone of the program was the Fauré Requiem, performed by Ensemble members Leah Knight (soprano and artistic director/co-founder), Patricia Combs (mezzo-soprano and co-founder), Robbie LaBanca (tenor), and Eric Johnson (baritone). It was interesting and novel to hear the entire work performed in chamber style, with only one voice per part and Fuller at the organ. The sound was thinner than the usual Requiem, of course, but provided a fresh take on an iconic work.

Ensemble Cameranze is a new group of young musicians who are talented, passionate, and intellectually rigorous (be sure to read the program notes and listen to the impressive lectures about the repertoire performed at their next concert). Though From Hell to High Estate felt less Romantic in thrust than I had anticipated, I have no doubt the group will take greater interpretive risks as its members grow together, as all ensembles with such high promise do. 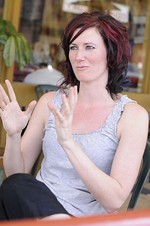 Why Chamber Music?
For the folks who play it, it's the intimacy and democracy and unity and fun