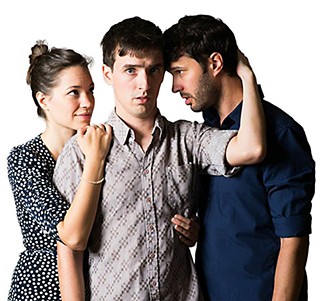 
Love is a fight. Enter a relationship, and you're entering a ring where you'll be in combat with that person to whom you've opened your heart. Blows will be traded, blood will be spilled, and someone will go down for the count – perhaps not in the physical sense, but you may feel as if you've been on the receiving end of battering hands or, if you prefer the imagery suggested by the title of this tough-minded romance, scratching claws and pecking beak. In any case, you'll be locked in a battle for control of your life and your shared lives.

That's the brutal, perverse message of Mike Bartlett's play, in which John thrashes it out with his male lover, M, and leaves him, then falls into a new relationship – the last kind he'd ever imagined himself falling into – with a woman. John loves W but is so unnerved by this heterosexual attraction – he's only ever fancied men, he says – that he returns to M for help in sorting out his feelings. That pits John against M, John against W, and M and W against each other – a three-way bout boasting the exhilarating energy and hard-to-watch aggression of a contact sport.

The thing is, there's next to no contact in it – not bodily, at least. Bartlett employs a sly theatricality in which we never see much of anything: no table setting when dinner is served, no clothes shed when sex takes place (and my oh my, does sex take place), no punches thrown or landing when the lovers go toe-to-toe. In Theatre en Bloc's staging, what we see is a chalk circle on a bare stage into which the actors step and confront each other in scenes demarked by the sound of a bell. What we see is their relationship to one another in space, how they position themselves close to and away from the person they're with and how that affects the scoring of points in this contest. Under the direction of Derek Kolluri (which shows the rigor of a choreographer – or better yet, a boxing trainer), the actors' moves often mimic those of prizefighters, maneuvering around each other, looking for an opening in their opponent's position, a place of vulnerability where one can land a quick punch and leave the other weakened, staggering, unable to strike back. But the fact that we see no blows to the body doesn't mean we see no painful impact. The verbal jabs unleashed here (most devastatingly by Ryan Hamilton's acerbic, astringent M) land with shattering force, and every actor lets us see the effect: a look of having the wind knocked out of them, of having their flesh sliced open, of being wounded in a way they know will never heal.

The play's fights turn on the future and kinds of comfort and sense of self that come with the love on offer. The support and enthusiasm that John gets from W (a bright, winsome Jenny Lavery) makes him feel like a better man, but he can't see himself as straight, even with a woman he loves. John is constantly diminished by M, but that relationship makes him feels closer to who he is. Ambivalence isn't a quality that's appealing or easy to convey, but Zac Carr communicates John's indecision with a confusion and sincerity that makes his indecision understandable, if not admirable. He's beaten down by the battles, punch-drunk to the point that he doesn't know the best path forward. Cock shows us not only that love is a fight but that in it, sometimes the only way to survive is to take a dive.