Get Jim Gaffigan talking about food, and he can fill a book

A lot differentiates Jim Gaffigan from his stand-up peers. Chiefly, he's the rare "clean" comic who has been embraced by the industry's alternative scene – as his inclusion in this year's Oddball Comedy and Curiosity Festival attests. And while the majority of the famed personalities within that subculture exude varying degrees of crudeness, misanthropy, and subversion, Gaffigan – pale, paunchy, 48 – has released five comedy albums in the last decade that showcase his unique devotion to the inoffensive concentrations of food and family. He's written a book apiece on those subjects in the last two years. The latest, Food: A Love Story, will take Gaffigan on a hybrid book/comedy tour that will span four months, three countries, and 43 dates.

The comedian-author, who appears at Bass Concert Hall Thursday, Oct. 23, gave the Chronicle a lot to digest regarding his favorite subject. For more thoughts, including Gaffigan's early open-mic memories, visit austinchronicle.com/daily.

Austin Chronicle: With a wife and five young children, your output of work as a comic, author, and actor is rather astonishing. How were you able to finish two books in as many years?

Jim Gaffigan: I would say that the help of my wife is pretty invaluable, in that I do everything with her – so she's the secret weapon. But – is it two years? Two books? I should say, for over the past 20 years I've been coming up with ideas and opinions on different food items, so I kind of did all the research on the food book – that's not to say that [writing it] wasn't difficult and time-consuming, but Food: A Love Story is something that was kind of stored away as ideas and notes and also in my head for quite some time.

AC: As a man with a self-described "unhealthy obsession with food" and father of five children aged 10 and under, how much do you and your wife worry that your appetites might negatively influence their dietary choices?

JG: That's a good point, and I kinda talk about that, like with vegetables – some of it is, there's acting, you know? Anyone who's a parent knows their strengths and weaknesses, and you try not to replicate them with your children. So, you know, I eat dinner every night, when I'm in town, with my kids. Some of my food writing is about how I feel about things and not necessarily how I live. You know, I write about bacon and barbecue from a point of view that you'd think I was eating it every meal, but I understand there's some balance. I'm not gonna sit there at the dinner table with my kids and say, "Brussels sprouts are disgusting." I'm gonna eat some of 'em and act like I enjoy them, you know?

AC: There's a segment of your latest book where you rave about steak. With Austin lying right in the heart of cattle country, where's your favorite place to get your steak fix here?

JG: Well, Texas is a really interesting conundrum: I have this map, and I talk about the geography of the United States – I don't really see anywhere that says "red state" or "blue state" or "north" or "south" or "east" or "west." I view it [all] as a major food geography, and, you know, this is kind of a humorous thing – I don't want you to think there's a science behind it. So I view the Southwest as Mexican Food Land, the Northeast is Shellfish Land, the Southeast general area is Eating Barbecue Land, going up to Kansas, and a lot of the eastern part of the Midwest and some of the East Coast is Super Bowl Sunday Food Land.

But what makes Texas unique – and I'm not just saying this because I'm performing in Austin, it's in my map in my book – is that Texas is a convergence of three of these larger areas. If you go to Texas, there's authentically amazing barbecue, there's authentically amazing Mexican or Tex-Mex, and as you mentioned, steak is a big thing. So there is a bit of a crisis that ensues when I'm going to Texas.

Now, you know, I love a steak, but I also know that the opening of my King Baby special [2009], which I shot in Austin, my kids were eating barbecued ribs from Salt Lick. And I don't think I've ever landed in the Austin airport and not eaten a taco while I watched some musician play. So, if I was looking for a steak in Texas, which you could – but I would probably lean more toward barbecue when I'm going to Austin. 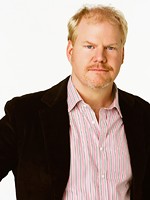 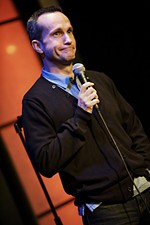 Jimmy Pardo
So how does this stand-up comic make working the crowd look so easy?