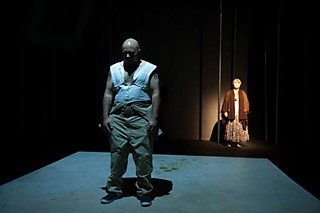 Color inside lines: J. Ben Wolfe and Cyndi Williams in Am I White? (Photo courtesy of Erica Nix)


The small square on the floor delineates the world of Wesley Connor. It's mostly meant to suggest the confining space of his cell at the Plymouth County Correctional Facility, where this cold-eyed malcontent has been held since his plot to blow up some national landmarks was discovered. But as we hear more of Connor's tale, as we connect the word "skinhead" tattooed across his gleaming skull to his activism in the White Order of Thule – a group that preaches just the sort of cultural supremacy its name implies – and hear him spew pieties about whiteness and threaten violence against those not white, that patch of paint beneath him also comes to represent a box in which Connor has long confined himself: a concept of racial identity built on privilege and prejudice, fed by fear and backed by brutality – one he refuses to step outside, even though he doesn't belong there.

See, the protagonist of Adrienne Dawes' tightly wound drama, receiving its world premiere from Salvage Vanguard Theater, has a mother who's white but a father who was black – a biological fact that would seem to preclude any sense of racial purity on Connor's part. But whether it's due to his father abandoning the family when Connor was a child or Connor's own need to achieve some sense of cultural superiority, he answers the play's titular question – Am I White? – with an emphatic yes, justifying it with the bit of pretzel logic that he can be truly white because he feels truly white. As Connor, J. Ben Wolfe sells that twisted idea with utmost gravity, and though Dawes has drawn it, as she has much of the character's personal history and philosophy, from the life of actual biracial white supremacist Leo Felton, the notion so flies in the face of rationality that hearing it voiced with such conviction is like a punch to the gut.

Between the emphatic espousals of bigotry, the breathtaking hypocrisy, and qualities such as the eyes like balls of lead when Wolfe's Connor stares down his keyed-up Aryan Brotherhood cellmate (Michael Joplin, all wide-eyed and jittery), Connor hardly comes across as a sympathetic figure. Even the flashbacks to his childhood and scenes with his girlfriend Polly (Katie Van Winkle, making an almost perky neo-Nazi) can't do much to make us like this hard case. But through his interactions with some figures we can feel for – notably his wearied mom (Cyndi Williams) and the self-described "Mexiblack" corrections officer (Florinda Bryant, taking no shit off anybody) – we at least realize how complicated and fraught Connor's sense of self is and what's driven him into this circumscribed enclosure of identity. The bars that designer Ia Ensterä has set around the playing space, as well as the square on the floor, speak of being trapped, and long before the end of this brisk and tense hour (a testament to the skill of director Jenny Larson), we can imagine that Connor will meet his final fate here. And when we see the blood spatter across that square, it's a reminder that the most important color isn't white or black or brown, but red – the one color we all share.