When a show features numbers with titles like "Shall We Dance?" "Hello, Young Lovers," and "Getting to Know You," you might guess that it's a very intimate work. That's exactly what you get with The King and I, currently running at Zach Theatre, but the sincerity of this staging is largely the product of the thoughtful direction by the company's associate artistic director, Abe Reybold.

The earnestness grows out of an emphasis on authenticity. Such a goal is complicated by the fact that the show – which follows Anna Leonowens, a teacher from Britain, helping Siam (present-day Thailand) to Westernize – can be viewed as condescending toward the cultures of southeast Asia. It's important to remember, however, that composer Richard Rodgers and lyricist/librettist Oscar Hammerstein II – the team responsible for such shows as Oklahoma!, South Pacific, and The Sound of Music – wrote the 1951 musical during the Red Scare and the Cold War, when the U.S. was concerned that Asian countries would adopt communism. The authors weren't against the East but were rather subtly asserting their allegiance to the West (a political move, given the blacklist that plagued the entertainment industry). And because the show has this angle, the piece runs the risk of falling into caricature. This is especially true of the King of Siam, a role that earned two Tonys and an Oscar for Yul Brynner.

Mel Maghuyop, who has played the King at several other theatres around the country, doesn't fall into this trap, instead portraying the character with great nuance. He is confident, yes, but he brings a heightened sensitivity to the role, most visible in moments such as the longing look he gives Anna in "Shall We Dance?" before putting out his hand to take hers. As the female lead, Jill Blackwood – returning to 19th century garb after last season's In the Next Room, or The Vibrator Play – complements him well, matching his strength and delivering elegant renditions of the play's celebrated songs.

They are supported by other fine actors and singers, notably YoonJeong Seong as Tuptim, whose romance with Lun Tha (Jason Yau) serves as the piece's subplot. As a junior wife of the King, Seong gives a stirring interpretation of "My Lord and Master." Contributing to the production's success at making the play authentic is the international cast; the Siamese characters are all played by performers with an Asian background, and many of them were born in that part of the world. The visual elements reinforce this effort at respectfully representing the culture, as in the detailed Buddhist iconography on the opening red and gold curtain in Kenneth Foy's set design and the elaborate and richly colorful costumes by Alison Heryer. It's been more than a quarter-century since Austin's previous professional staging of the show, and this version has a new generation of theatregoers "getting to know" the play in a personal way. 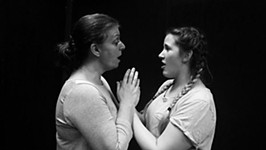 Merrily We Roll Along
You wouldn't know this Sondheim musical was a legendary flop from the impressive staging at St. Ed's