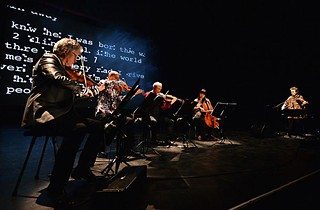 The Kronos Quartet and Laurie Anderson performing Landfall: Scenes From My New Novel at the Barbican Centre in London in June 2013. (Photo courtesy of Mark Allan)

On Oct. 14, Texas Performing Arts presents Landfall, a 100-minute work for string quartet, voice, and electronics, written by performance artist Laurie Anderson. Anderson, however, is just one of two artistic powerhouses involved; the other is the Kronos Quartet, the trailblazing ensemble that has fundamentally transformed the landscape of contemporary music in its 41-year history. Landfall marks the first collaboration between Anderson and Kronos, and the synergy of these two forces is like mixing Mentos and Coke.

To learn how the two developed the work, the Chronicle spoke with Kronos founder and violinist David Harrington while he was waiting in a quiet corner of JFK airport. Despite the somewhat ungodly hour for a Sunday morning, Harrington generously shared a glimpse of the rehearsal process and offered insights into how the ensemble sustains its musical commitment and integrity.

Austin Chronicle: I have to start with the most obvious question: Kronos has collaborated with everyone from Steve Reich to David Bowie. How is it only now that Kronos is working with Laurie Anderson?

David Harrington: Well, I first met Laurie Anderson 25 years ago, backstage at a concert in Columbus, Ohio. That's when I first asked her if she'd be willing to write for Kronos. The idea was in the air for a long time. We'd run into each other, and she came to many of our concerts. But now that we've been together and we've had such a great time, we're asking the same question!

AC: So, what was the process for preparing Landfall?

DH: We started rehearsing together, improvising and experimenting, more than a year before the piece was premiered. The piece didn't start out the way it ended up.

AC: How would you describe the rehearsals?

DH: What I came to realize is that Laurie Anderson collects ideas – musical moments. We might have a six-hour session at her studio, and she would record every bit of that. So if we were there three to four days, she would have 20 hours of material. Then she would sift through all of it, like a gold mine.

AC: Was there a lot of give and take with Anderson in the compositional process?

DH: There was. She used Kronos as source material; our collective imagination worked as elements to guide and inform her own decisions. It's hard to describe it accurately. It was definitely a team effort, but it is also definitely her music. But it's all of ours when we play it.

AC: Both Kronos and Laurie Anderson have a long history with technology. In your view, how has technological innovation affected music? Do you find it makes composers and performers more or less engaged?

DH: The world that we're a part of now offers all sorts of possibilities and choices that need to be made. It's thrilling to be a part of it, but it's daunting. I think people are working harder than they've ever worked because of all of the choices. It's important to make really good choices, though. For the work that Kronos does, I need to be sure that everything we do magnetizes into us, so that the relationship, process, and resulting motion is something we all feel totally pulled by and drawn to. That is a really important part of being in this incredibly interesting and exciting world – learning to listen to yourself and trust your instinct. There should be a doctorate in trusting your instinct.

AC: Along those lines, you must be inundated with requests from composers to play their works. How do you choose which projects to pursue?

DH: When I'm exploring a new musician, composer, or a filmmaker, I try to look at the trajectory of work and get a sense of what has already been done, as well as some of their aspirations. What kind of music is inside that hasn't been revealed to the universe yet? Those are the people that we want to work with. Certainly Laurie Anderson has been that with Landfall.

AC: Finally, what would you like to say to audiences about Landfall? Do you have any ideas to share with them as they listen?

DH: I think of Landfall as an opportunity for our audience to reflect on many different things, and I wouldn't want to impede someone's listening by trying to direct it. I would want the entire experience of the work to take them wherever it will. So, allow the work to play you. If I have any sort of idea, that's what I would say. 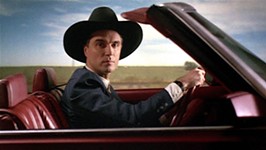