In The Great Society, playwright Robert Schenkkan and his subject, LBJ, both gamble big 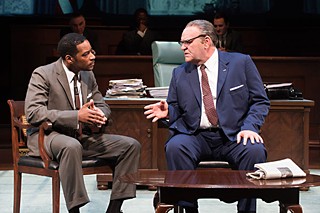 You've just come off a winning hand that by all rights shouldn't have paid off so richly. The cards were not in your favor – indeed, the deck looked stacked against you – but you took the gamble anyway and hit the jackpot. Now, just when the smart move would be to walk away from the table, you tell the dealer you're in for one more, then stake all that you've gained on the cards you're dealt.

Lyndon Baines Johnson never compares the presidency to a round of poker in The Great Society – actually, this sequel to the Tony Award-winning All the Way, currently receiving its world premiere at the Oregon Shakespeare Festival, opens with LBJ likening the office to a rodeo bull ride, where you're bound to get thrown and may never get up – but this saga of the term following his re-election is so rife with risks and big bets placed on long odds that you'd swear the White House had been relocated to Vegas.

The unlikely winning hand held by Johnson in the prior play was the Civil Rights Act of 1964, that landmark piece of legislation banning racial segregation and discrimination against minorities which ought to have suffered the same fate as every other civil rights bill since Reconstruction, stymied by the coalition of segregationist Dixiecrats in Congress. But, as grippingly dramatized by playwright Robert Schenkkan, LBJ marshaled all his skills at horse-trading and arm-twisting, his matchless command of Senate rules, and his newfound authority as President to secure the votes for the act's passage. For his efforts, he was rewarded with a landslide victory – 61% of the popular vote – in November '64.

When you've just been handed four more years in the Oval Office, though, you can hardly cash in your chips and go home – and that's not in LBJ's DNA, anyway. He shoves all his political capital to the center of the table and bets it on a slew of domestic programs intended to follow through on the work begun by the New Deal and transform our nation into the Great Society. Given that title and the legislative focus of All the Way, one might assume that this play tracks the enactment of the Voting Rights Act and Elementary and Secondary Education Act in 1965, the establishment of Medicare and the War on Poverty programs, or the scores of other progressive bills passed before LBJ left office. But that isn't the case. While LBJ's domestic achievements are numerous and consequential, they're given scant attention here. From the outset – remember that opening allusion to a bruising bull ride? – the focus is on the fights facing Johnson, the ones he can't win. To his right, he's bedeviled by fiscal hawks Everett Dirksen and Wilbur Mills, relentlessly pecking away at appropriations for his social initiatives. To his left, it's Bobby Kennedy, packing grudges from his late brother's term, picking at Great Society programs for not being progressive enough; and the civil rights movement, led by Martin Luther King Jr., pressing for more federal support with voting rights legislation and the brutal authorities in the South; and Stokely Carmichael, raising the civil rights stakes with calls for "Black Power." And then there's Vietnam, the Far Eastern conflict that LBJ refuses to abandon, despite the rapidly escalating costs in blood and treasure. Schenkkan makes clear that this time out of the gate, the President will get bucked and busted up, and eventually he will get thrown.

With Vietnam, LBJ comes to look like a luckless gambler on a losing streak. Schenkkan salts The Great Society with periodic scenes of Robert McNamara bringing the President updates on the war. They're never good. And as the Secretary of Defense enters or leaves, a projection often flashes the current number of Americans dead and wounded, so we see the count steadily rise from 489 casualties in early 1965 to 38,620 by December '68. But in each visit, McNamara argues that the next surge in troops or bombing will turn the tide, so LBJ doubles down, even though he's distressed by the loss of life (conveyed efficiently but feelingly in a scene of Johnson dictating a letter to the parents of a slain soldier) and knows that the war is bleeding his Great Society programs of their funding. He feels as if he has no other choice. The second act opens with LBJ recounting a dream in which he's on a B-17 that's been shot down by Japanese Zeroes. It's burning and about to crash, but there are no parachutes. "Do I jump out and die," he asks, "or stay in the plane and burn alive? What do I do?"

The President isn't alone in confronting such an impossible position or in trying to parlay one unlikely win into a second. In The Great Society's first act, Dr. King must decide whether to cross the Pettus Bridge and risk a slaughter at the hands of Alabama troopers or not cross it and lose all credibility for the movement. Though he chooses the latter, a subsequent deal between LBJ and Gov. George Wallace allows for a full march from Selma to Montgomery and helps propel passage of the 1965 Voting Rights Act. On the strength of that success, King turns northward, launching a new campaign to improve conditions for the urban poor in Chicago. But the intransigence of Mayor Daley, combined with mounting desperation in the movement, increasingly violent protests, and hostility from whites beside which Southern hatred pales, frustrate King's every move. "I fundamentally misunderstood Chicago," he tells his colleagues at one point, and MLK could be LBJ talking about Vietnam. Indeed, in Schenkkan's telling, Chicago seems to be King's Vietnam: the place in which he cannot gain ground no matter what he does and from which he cannot extricate himself. After striking an empty deal with Daley, King is asked what he wants to do, and he replies, "I have no fucking idea" – a line that's repeated by Johnson in the very next scene.

Setting up the commander-in-chief and the civil rights leader as mirror versions of each other is an example of the doubling down that the playwright himself does in his follow-up to All the Way. That first play was about as improbable a success as you'll find in the American theatre these days. Historical dramas don't exactly burn up the box office as it is (certainly not without songs), but one that's about a not-much-beloved political figure embroiled in legislative maneuvering, requires some 20 actors to fill more than 50 roles, and runs almost three hours would seem dead in the water commercially. But when Schenkkan was penning the play for OSF's American Revolutions initiative, who could guess that Bryan Cranston would throw all his post-Breaking Bad weight behind a Broadway run (a sizable gamble all its own)? That drew many to the play who might have otherwise ignored it and paved the way for a run not just profitable but record-setting, two Tonys (one for Cranston, one for the play), and a forthcoming HBO film.

With those successes, as well as another seven awards for the script itself, Schenkkan might understandably have opted to draft the sequel – commissioned by Seattle Repertory Theatre before All the Way even opened – strictly following the first play's blueprint. But while The Great Society is clearly a companion piece to All the Way – also with a large cast and many of the same characters, using historical events to drive the play's action, having actors not in scenes remain onstage as witnesses to history – the sequel shows Schenkkan taking more risks as a dramatist, being bolder theatrically. He leaves behind the master politico of All the Way, getting whatever he wants through his iron grasp of rules and steely force of will, to present a frustrated and increasingly paranoid figure up against forces – inner-city rage, the anti-war movement, Vietnam – that he cannot tower over and bully into submission. Schenkkan has Jimmie Lee Jackson, the African-American whose murder by an Alabama trooper prompts the march from Selma to Montgomery, narrate his own killing – a ghost who haunts MLK quite literally. And as he speaks, the playwright has the witnesses pound the set, creating an ominous soundtrack, part martial advance, part heartbeat.

And that parallelism of LBJ and MLK – the amount of time given over to King does indeed lessen the attention to Johnson, but what comes from it is a heightened sense that LBJ's failings weren't his alone. Whatever forces had held the country together before the Sixties – whether positive such as the nuclear family, civic duty, and patriotism, or negative like oppression and segregation – unraveled in that decade, and leaders of every kind were hard-pressed to keep any of those threads together. Seen from that perspective, LBJ's tragedy owes less to the kind of specific pathological personality that undid, say, Nixon (who makes a creepy cameo at play's end) than the societal upheaval of the times. Johnson's big ego and obstinacy may not have helped matters, but The Great Society leaves one to wonder what anyone else in that office could have done with the social fabric fraying so swiftly and dramatically. Schenkkan has gambled big again in his second play about LBJ, but in provoking us to reconsider the man and his presidency, what he gambled and how he ultimately lost, it pays off.

The playwright is again well-served by OSF, with no disrespect intended to the company or artists by not providing more details of the production. Much of the praise I'd lavish on them echoes that of the 2012 premiere of All the Way: Bill Rauch's stellar direction again provides a timeliness and an urgency to these events five decades past that not only compels our interest but connects us palpably to the issues of race, war, social injustice, and political animosity we face today. And again, every actor in the cast – 17 strong! – fashions figures of blood and passion, none more so than Kenajuan Bentley as a resolute but troubled MLK and Jack Willis as the beleaguered but not bent LBJ. As embodied by Willis, Johnson may have been thrown by the bull, but he never loosened his grip. These artists make that era and its people vividly alive again, but their achievement begins with Schenkkan's words and the second big gamble he's taken with LBJ.

Oregon Shakespeare Festival Artistic Director Bill Rauch talks about staging All the Way and The Great Society in an interview at austinchronicle.com/daily. 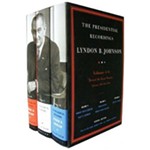