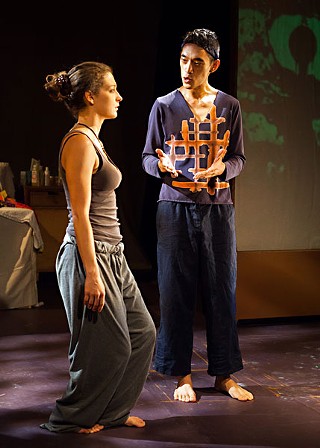 The line is directed toward a young American dancer by her sensei, a master of the Japanese postwar dance form butoh, who is pushing her to feel "the unending decay of the body" and let that drive her movement. Butoh, he tells her, is about "the body and its limitations," and dancing it will "reveal the pattern of death." For us in the audience, the idea is a potent one, as is the image of caustic, corrosive liquid coursing through one's physical shell, since in other scenes we've seen the future version of this young dancer, Annie, be diagnosed with and treated for Stage 4 cancer. There comes a time when acid is filling her up.

In using butoh and its philosophical underpinnings as a lens for looking at cancer, playwright Katie Bender manages to strip from the terminal-disease drama much of the tearjerking sentiment in which it's so often overdressed. Though her new play Still Now contains many of the standard moments in such fare – the tests for the patient's unusual symptoms, the delivery of the diagnosis, the hospital stays, the harrowing treatments, the explosive quarrel with a frustrated loved one, the inexorable physical decline, the final confrontation with the inevitable – their juxtaposition with the patient's earlier efforts to comprehend and absorb into her body an art rooted in degeneration defuse the softheartedness that might otherwise saturate them. The younger Annie is a determined and committed artist pursuing a practice, one that is punishing and painful. While her older self didn't seek out cancer, her ability to persevere through it may come by recognizing it as butoh in another form, a practice in which she need no longer imagine decay and death within her; it is palpably, irrevocably present.

Bender is well served by having a performer of Amelia Turner's diligence filling Annie's shoes. In this Shrewd Productions staging, as she did in UT New Theatre's presentation in March, Turner's dancer moves with a persuasive resolve, convincing us that she would go halfway round the world to study with the brusque, enigmatic, American Spirits-smoking Amagatsu – Jonathan Itchon, an appealing Yoda by way of Yokohama – and persist in the face of his curt tutelage. And she nimbly sidesteps any self-pity that might cause her cancer victim to slip into mortality martyrdom, a move especially helpful when she's at odds with her lover, Ben – Joseph Garlock, wry and supportive until he boils over from the powerlessness and exasperation he feels watching her die. The lovers lock horns with force, with no sense that Annie's illness entitles her to a sympathy card.

Where the production loses its footing somewhat is in the same place that gives the script its fresh perspective: butoh. The play calls for a chorus of dancers to perform butoh movements in and around various scenes. Choreographers Abel and Junko Coelho boast considerable experience with the dance, in study and performance, and yet the work we see lacks the sort of internal tension and rigor of practice described by Amagatsu. Bender has created such a specific sense of butoh with her words – that burning, taxing, relentless process of disintegration, that chaos dance – that dancers of exceptional skill are required if we are to see that which we hear. That said, the production, as directed by Rudy Ramirez, manages to show us something new about a painfully familiar disease: how we might dance with it. 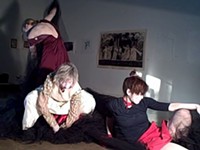