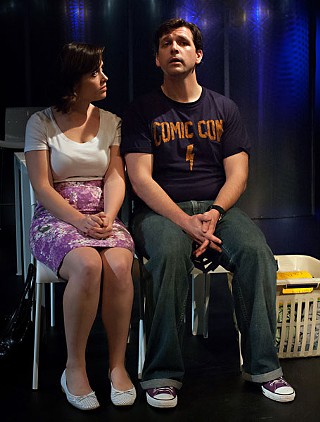 Until Friday night, I hadn't given any of these a lot of thought since undergrad physics. Then I came face-to-face with Fermilab – or, to be more particle-ar, Penfold Theatre Company's surreal reimagining of it. A simple network of exposed, glowing lightbulbs dots the ceiling; one is burnt out. Vibrant blue lighting collides with stark white set-pieces while projections of molecules and other scientific-looking designs dance whimsically on the large reflective wall upstage. Is this the present? It could be another time, maybe even another place – and that's precisely the idea.

Enter Nathan Jerkins as Henry, huddled under a table in fear of giving a public lecture. Henry is a theoretical physicist at Fermilab, and his neuroses are brought to the fore with the sweetest sincerity and wit by Jerkins. In turns both uproarious and vulnerable, Jerkins traces Henry's journey of conquering his fears, which forms the cornerstone of this effective production. But that journey isn't a straightforward one, at least in terms of linear storytelling. Because there's also Ginny, the undergrad intern for whom Henry has a thing. And that thing seems reciprocated. But Ginny is married to Chris – or is she?

It's that kind of question that's most interestingly posed by Penny Penniston's Now Then Again, because her play deals in alternate time frames and, to an extent, even alternate histories. To experience Penfold's staging is to feel jolted through a vortex of past, present, and future, never quite certain which way is up or when we are. As Ginny, the effervescent Megan Rabuse is bright and bubbly at the start (or is it the end? middle?), but her characterizations change – as do most of the characters' – as different points converge on a space-time continuum throughout the production. Keeping track of these shifts in demeanor can prove challenging as the characters are hurled among setting and relative-ness, but it quickly becomes clear that "figuring it out" isn't the point. There's nothing to figure out; this isn't The Sixth Sense with a major plot-twist revelation. Instead, it's a simple story told with effective direction by Ryan Crowder and framed by simple yet evocative production elements under the technical direction of Patrick and Holly Crowley.

Now Then Again is a smart choice for this particular Penfold season, as it foreshadows the similarly time-bending The Last Five Years, which the company will produce this spring. Both shows center on the timeless tale of relationships and are told with timeless – or rather, time-warping – conventions. This kind of unifying factor provides a cohesive quality to Penfold's seventh season, making this, its opener, all the more apropos and timely.