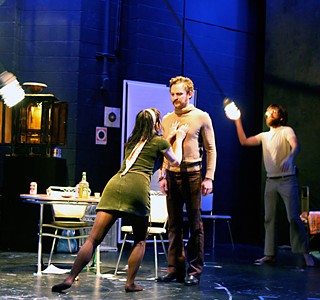 
Falling under the spell of a thought leader, a guru, can be dangerous. In its most extreme versions, following a teacher means giving oneself over to a cult. For most of us, it means fond memories of that kooky college professor who challenged your assumptions. In between lies a hazy relationship between students and teacher, where it's uncertain how much is genuine discovery and how much is a big waste of energy that might be better spent on traditionally gainful employment.

In the theatre, where artists already face constant questions of whether their work holds any value, the confusion is even more potent. Becoming a great actor takes time and the willingness to spend energy on exercises that look justifiably silly to the uninitiated. Writers go off to remote retreats to either write or bang, or both, or stare into the sky unproductively. Companies apply for travel grants to distant locations, all in the name of learning.

Which is what the Rude Mechs did during the long development process for The Method Gun, which finished a brief run at the University of Texas Department of Theatre & Dance on Sunday. Everything in The Method Gun eventually folds in on itself.

In this play, a company of actors wakes up one day to discover that their guru, Stella Burden, has vanished. They are left to pick up the pieces and either continue with rehearsals for their production of Tennessee Williams' A Streetcar Named Desire minus all the major characters, which may or may not be ridiculous, or to give up on years of passion, hard work, and community and abandon the show. With no leader besides the method that Stella Burden left them – "the Approach" – this collective of artists soldiers on to opening night, fighting with one another the whole time.

The central question that Stella Burden supposedly posed to all of her prospective students was "Truth or beauty?" The Method Gun asks the same question, in a way. Do we keep faith with our guru or turn back to the mainstream? Where does truth lie?

In showing what happens to these actors as they refuse to let go of their devotion, it almost appears that the play is coming down on the side of calling all of them ridiculous. Perhaps the Rudes are even calling their own work ridiculous, given that they follow a model that's different – but not completely different – from the one they portray. But then we see moments of grace and precision, where actors risk actual injury. It is beautiful. The Method Gun is a show that couldn't have happened in the typical three-to-six-week rehearsal process that most companies allow themselves. It required work, study, and, yes, devotion.

This is a play that both affirms and dismantles everything your own guru taught you. If we believe that there is truth in The Method Gun, then having your faith shaken is exactly what Stella Burden had in mind.