What price victory: Henry (Robert Faires) ponders the question after the Battle of Agincourt. (Photo courtesy of Bret Brookshire)

Through the fog of the haze-filled Rollins Studio Theatre emerges Robert Faires, whom most everyone in the audience is here to see (and who is, full disclosure, the Chronicle Arts Editor). But this isn't a cinematic, fanfare-ish sort of reveal. He greets you not in character as Henry V (or any of the many other personae he'll embody throughout his ensuing one-man adaptation of Shakesperare's iconic history play) but as himself: simply Robert. He hugs old friends and colleagues, makes small talk with those he doesn't know (though these are probably few), and bounds into the house to encourage his guests to move into closer seats or even join him onstage. Aside from the patrons, Faires himself, and a few lighting instruments, there's not much else to behold from a visual perspective. A couple of abstract set pieces, perhaps.

This frame provides an interesting introduction to the main event, acknowledging the minimalist scenic tendencies of Elizabethan theatre while also prefacing an intimate portrait of both an actor and his characters. The theme is carried throughout the next 75 minutes as Faires employs incredibly simple nuances of physicality and voice to morph between the characters of Henry V. There's no trunk or rack from which he pulls multiple hats or costume pieces to signify change of character, a common device in one-performer shows. In fact, the only "costume" change to my recollection involves the wearing and removal of eyeglasses. In stripping away elaborate props, costumes, and scenery, Faires pays particular homage both to Shakespeare's text and to the craft of acting itself. And it's remarkably effective.

In this presentation by Austin Shakespeare and Red Then Productions, Jason Amato's inspired lighting design plays its own impressive role, with its stark lines and simple quality. As the medium of haze allows Amato's beams to cut through the air, you're reminded of the slicing swords of the Battle of Agincourt. A red beam of light signifies blood. There's no heady metaphor here. Once again, the player and the text are at the center of focus, and the lighting is in service to the story. It's just enough; no bells or whistles. And that makes it just right for the context.

In an age when it has become standard practice to "update" or "re-set" Shakespeare's plays (and many productions do achieve this successfully), it's also refreshing to experience a version of the Bard's work that strips away most of the production elements one associates with lavish theatrical ventures in favor of a wholly simple approach to the story, characters, and action. This is the experience with which I departed the Rollins, and it's one that might cause you to view the possibilities and potentialities of Shakespeare – and theatrical convention itself – in a new light. 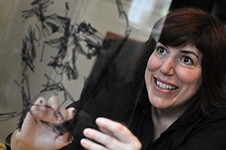