Capital T Theatre's Detroit is a destination worth visiting, but you won't want to live there 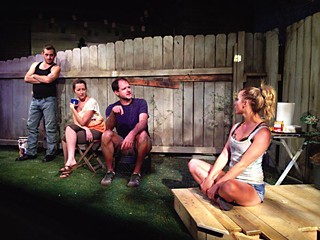 Imagine you're searching for a house that your grandparents lived in before you were born, a house that you've only heard about but never visited, and the only thing you have to guide you to it is a map that's 50 years old. Oh, and the vehicle in which you're traveling is a rattletrap liable to throw a wheel at the next turn.

Though the two couples in Lisa D'Amour's comic drama remain homebound throughout – we spend the play bouncing between their adjoining backyards – the above pretty much sums up their situations. They're cruising through suburbia desperately looking for the American Dream that supposedly lived there in the middle of the last century. But so many things that have sprouted in the culture since – widespread drug use, strip clubs, the Internet – have obscured the landmarks pointing the way there and made it all but impossible to find. And the ramshackle recession economy certainly isn't helping matters. It's cost Ben – presiding over his beloved barbecue grill – his job as a bank loan officer, which is in turn costing paralegal Mary – knocking back her beloved vodka – her mental stability. And it's keeping new neighbors Sharon and Kenny in low-level dead-end jobs: her at a call center, him in a warehouse (though, to be fair, the pair being fresh from rehab doesn't help their employment prospects). As the four fumble toward a next-door neighborliness of generations past, they seem earnest in their desires for better lives reached through hard work and perseverance, but they also reveal how little of either they have to work with and how easily they're distracted by the many temptations of 21st century American life.

The stresses and strains felt by this quartet bleeds through virtually every moment of Capital T Theatre's production. Ben and Mary are ostensibly the more stable pair, being a little older and settled in their home, but Jason Phelps and Rebecca Robinson let us see the fault lines in their psyches right away, every broach of awkward topic or public admission of a private matter causing faces to tighten or backs to stiffen. As the younger-and-yet-tried-it-all Sharon and Kenny, Rebecca Pearcy and Joey Hood radiate a deep intimacy with addictive substances, albeit in very different ways; his is the dreamy smirk of the user recalling that matchless high, hers the sunken-eyed, haunted look of the junkie craving just one more hit. We can see that it will take just one well-placed rattle for their fractured selves to crack apart.

It isn't really revealing much to say that little quake arrives before play's end, but the surprise here – and part of the wonder of D'Amour's script – is the way in which it happens: One of those parties where that one drink too many tips the scales into unwise behavior, where all the internal restraints against truth-telling and sexual attraction and trashing property just slide away. On a marvel of a set by Ia Ensterä, capturing on Hyde Park Theatre's tiny stage all the middle-class blandeur of the midcentury tract home – patio, fence, lawn, and all – impulse control gives way to boozy, woozy transgressions at once hilarious and appalling – the escalating rowdiness is sharply calibrated by director Mark Pickell and cast – until that safe suburban stronghold of the backyard becomes ground zero for 21st century American alienation and frustration. The real Motor City went bankrupt, and so did all our deeply rooted dreams of domestic prosperity. In the unlikely event you find that house where your grandparents lived, even if the exterior still looks good, it's almost certain to be empty inside. 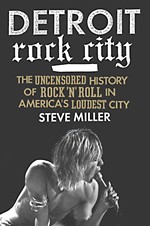