Oh, Urinetown: that parody of parodies. This silliest of musicals now plays at City Theatre under the direction of Marco Bazan.

The story opens, as so many do, with a line for the toilet. Cruelly, the toilets in this musical cost money to use. (It's been written that the show was inspired by the lack of free restrooms in much of Europe.) To pee without paying in this land is to be arrested and exiled to Urinetown, a not-really-concealed euphemism for execution. The impoverished people of Public Amenity No. 9 lead a revolt against the Urine Good Company (say it out loud, yes?), which runs the toilets and reaps the profits. The man guiding the revolution is Bobby Strong (Daniel Monplaisir), who in turn follows the inspiring words of his love interest Hope Cladwell (Evelyn LaLonde). Fresh out of "the most expensive university in the world," Hope is the daughter of capitalist Caldwell B. Cladwell (Kirk Kelso), who runs UGC and seeks to quash the rebellion at any cost.

The whole thing is ridiculous, but smartly so. Those with a theatre background will appreciate the send-up of the politically minded, leftist works of Bertolt Brecht and Marc Blitzstein. Subtlety is not the goal here, with character names like Penny Pennywise (a deliciously exuberant Cathie Sheridan) or Officers Lockstock and Barrel (Gil Austin and Jeff Phillips, respectively). Lockstock partners with Little Sally (a rather tall Vanessa Marie) to narrate the story, and very few chances for delivering lines directly to the audience are missed throughout. The songs and choreography (Sheridan doubles as music director, and Andy Berkovsky provides choreography) also point to several Broadway musical styles of the last 50 years, from Fiddler on the Roof to Les Misérables. Not everyone in the company nails every style, but the ensemble numbers come together enough to be enjoyable.

For audiences who don't care about the theatrical antecedents, it's just as well. Book writer/co-lyricist Greg Kotis and composer/co-lyricist Mark Hollmann aren't trying to formulate a viable political message here, which is obvious by the end. Instead, this musical is about fun, fun, fun for everybody. And if the water shortage which creates a need for the pay-to-pee toilets in the first place hits a little close to home in August in Central Texas, fine. Just don't forget to laugh while you also feel a bit guilty the next time you flush for free. 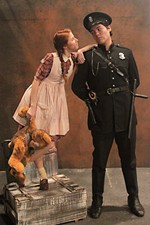 Urinetown: The Musical
Texas State University's delightful staging showed off all the strengths of its musical theatre program