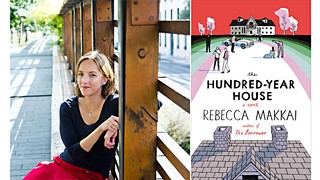 Rebecca Makkai's The Hundred-Year House is a sly, funny, literary mystery, a meet-cute romantic comedy, and a metafictional meditation on fate rolled up into one. The story begins in 1999, when married couple Doug and Zee move into the coach house of her parents' estate. Laurelfield is more than just a free place to live while Doug finishes his book; it was once an artists' colony and may hold the key to Doug's research on modernist poet Edwin Parfitt. Oh yeah, it's also haunted.

Just when you think you have a handle on the mystery, it delves backward in time – and further back, and further back – until it starts looking like Possession with a twist of Charlie Kaufman. What's the truth? Makkai isn't telling, though readers who join the second meeting of the Austin Chronicle Book Club next Monday, Aug. 25 – for which The Hundred-Year House is the selected read – will have a chance to ask when she joins the #ACreads Twitter chat toward the end. We decided to get the ball rolling with a few questions of our own.

Austin Chronicle: How did you get the idea to structure the novel the way you did?

Rebecca Makkai: Originally, I envisioned it all being in one time period, 1999. It started with the idea of them researching the history of the house. Something cataclysmic happened in the past, and they don't know whether to believe it or not. Then I realized that the only message a book like that can leave you with is, "We'll never know." And that frustrates me. I recently read Julian Barnes' The Sense of an Ending, which is a brilliant book, but that's basically the message it leaves you with: "Well, some stuff happened in the past, and you'll never know, and the characters will never know." It frustrated me immensely, even though I loved the book. I came to the same conclusion when I was working on The Hundred-Year House, but I didn't want to leave people there. Because that's what real life is like, and real life is frustrating. I was in the bathroom one morning brushing my teeth, thinking about the book, and I had this realization that I could actually jump down the rabbit hole, go back – first to the Fifties. And I realized if I did that, I should also show the colony [in the Twenties], and I should also show when the house was built. At that point, it became not only the structure of the book but a major theme of the book, too – the idea of cause and effect, the idea of fate, the idea of whether we're pushed by the past or pulled by the future. What happens if you possibly try to trick fate in some way? In 1999, Doug is working on a series of children's books, and he makes uninvited changes to the world of the series and gets in trouble. That's sort of a little clue as to some of the cosmology of the larger story.

AC: What about the ghost? Is the ghost real?

RM: I wanted to be able to read the book both ways. A lot of weird stuff happens, but nothing happens that is impossible in a rational, scientific world. It's not like things jump out at you, it's not like you see flashing lights or anything like that. Everything has a possible explanation. But what's weird is the cumulation of luck for the characters. If you look at Case in 1999, any one bad thing happening to him would have seemed really normal. But it's the mountainous pile-up of stuff that happens to him, at a certain point it stops being normal or realistic and starts being really weird. I wanted us to question: Why is it that we only think things are normal if the good and bad luck are in equal balance, and if they're out of balance we start to feel strange about it, like there are things pulling or pushing us?

RM: I grew up right near one. The setting of the novel is north of Chicago, and there's an artists' colony called Ragsdale which is basically right where Laurelfield would be. I would drive past that as a kid, and, even as a young writer, long before I stayed there, it captured my imagination. So I had the idea for the setting before I myself had ever set foot in an artists' residency. Once I made that decision, I realized I needed to start applying for artists' residencies, so I could see them from the inside. Also, at that point I had kids, so I kind of had to if I was going to get any work done. [Laughs.] I started [the 1929 section] at Yaddo in upstate New York, one of the really old ones. So it's definitely steeped in that environment for me.

RM: I originally had considered putting some real artists in the 1929 section, I had Georgia O'Keeffe in there originally and Marianne Moore. That was fun, but they really weren't serving much purpose in the narrative, and I couldn't be that flexible with their lives, so I basically ended up folding them both into one painter character. And I had fun with movie history. For instance, I had an actress character Marceline Horn in 1929, and she's completely fictional. But in 1999, Doug and Miriam are watching a movie that has Marceline Horn in it, and Miriam tells the story about how everyone in the movie died. Well, everyone else in the movie was real and really did die strangely. But the movie itself wasn't real, and Marceline wasn't real... I do like the idea of people being maybe tricked into believing it's real. I've had people say, "I know that Edwin Parfitt was a real poet, but – " And I'm like, "No, no, that's not actually the case!" 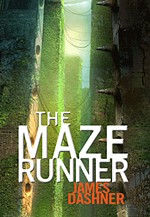 #ACreads: The Maze Runner
We mused on the YA novel's hunks as prom dates; now who's going to Love Me Back? 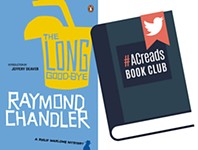