The degraded, petrochemical suburb of Galena Park just east of Houston is hardly Proust's Illiers-Combray, but because I spent so much of my happy childhood there, the otherwise troubling landscape of a smoke-belching oil refinery in neighboring Pasadena has, for me, all the romance of the Eure-et-Loir. So strong is the pull of associative memory. In Vecinos, the latest offering from Teatro Vivo, middle-aged Maria (Alejandra Murga), who sells her nice, comfortable house to move to an apartment in the "barrio" of her hometown, is clearly under just such a spell.

Aeschylus said, "Memory is the mother of all wisdom." It certainly served Tennessee Williams well, and indeed this story's young Samuel (Mario Ramirez) – who alternates between addressing the audience directly and living inside his family drama – shares a few technical commonalities with The Glass Menagerie's Tom Wingfield. Yet, while Tom looks back with some bitterness and a distinct lack of empathy toward his mother, Samuel is full of affection for his father, Roberto (Rupert Reyes), even in the elder's most curmudgeonly moments.

Upon her return to the old neighborhood, and with the assistance of her grown daughter Sylvia (Karinna Perez-Cantu), Maria has a run-in with Roberto and Samuel. Although the women are initially fearful of the men, a dual-generation romance soon blossoms, and the audience can't help but meditate upon the impact of maturity in affairs of the heart.

Soon the neighbors are enjoying a kind of communal cohabitation as they move back and forth between the two apartments, their camaraderie supported by a metaphorical fifth character: food. Queso, enchiladas, cervezas, oh my! Hispanic culture is rich with (and proud of) its culinary comforts, and here, as in life, it's no latecomer to the party.

In a sense, all of these characters are caught in a crossfire between the past and the present. Maria thinks returning to the old neighborhood will truly bring her home at a time when she is painfully aware of her own mortality. Sylvia glances backward at a marriage that must have been happy once, while enjoying the fleeting pleasures of a fling. Roberto mourns his dead wife even as he courts Maria, and Samuel celebrates a father to whom he never confessed his love.

Reyes, who also wrote the play, is unapologetic in the program notes when he calls Vecinos a tribute to his father. While playing the role of his own father must have been challenging, we'll have to assume he nailed it. Stubborn, headstrong, domineering, Roberto is nonetheless oh-so-subtly vulnerable and sweet. He's that hard candy with a soft center, and equally satisfying. This Salute la Familia slips into sentimentality at times, but its culturally anchored reverence for the family is clear and honorable. 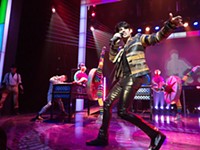 The Who's Tommy
Zach's revival of the rock opera takes its cue from Alice in Wonderland, and while vivid, it lacks consistency