The joke's on CD, as Austin comedy gets its own record label 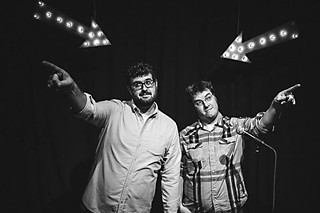 Duncan Carson and Brendan K. O'Grady have hosted Sure Thing, a weekly stand-up showcase, since 2012. In an interview last April, O'Grady announced plans to expand the show into a record label of the same name. That's now done, and Sure Thing's first CD featuring 15 comedians drops Saturday, Aug. 16.

While the show's success inspired the label, it wasn't the only catalyst. "I always wanted to run a punk rock record label," says O'Grady. "In high school, I always thought that sounded like a super fun idea. But it turned out my life didn't go towards music." Now, as a comedian, he's interested in ways to expand the reach of Austin's comedy scene, which can sometimes feel dwarfed by cities like New York and L.A. Carson agrees. "The level of talent here isn't matched by the level of exposure or avenues for displaying that talent," he says. "If we can just be the two guys who are a little bit organized and have a successful enterprise that enables us to maybe spread everyone's reach a little bit, why not?"

Along with O'Grady and Carson, 13 other comedians contributed to the CD, which they recorded during a live Sure Thing show. "We definitely wanted a mix of comics," says O'Grady. "There are many more great comics than appear on this record. Part of the reason for that is we wanted to be sure that we don't overlap in style and tone too much." Or to put it another way: "Just like a mixtape, you can't have 'Stairway to Heaven' back-to-back," says O'Grady.

In an e-mail interview, album contributor and Sure Thing regular Danny Palumbo (of the joke site Lil' Buco) discussed how he approached his set for Sure Thing (Live!): "I choose bits based off of the situation, but I try my hardest not to write things for a specific situation. Like I opened up for Big Jay Oakerson recently at Cap [City Comedy Club], and he is hilarious and dirty. I wrote something a while ago about my initials meaning double penetration, and I remember being like, 'Yeah, this is as good a place as any to try this dumb opener.' And it went well. I felt like I could do that because they were there to see Big Jay and prepared to see dirty material. But you shouldn't open up by talking about double penetration. That's advice for anybody doing anything."

Fellow Austin-based comic Amber Bixby also lent her set to the album and, like Palumbo, let the crowd steer her. "I took what were my favorite jokes and my best," she says. "I picked out of those what would flow together best, and then when I got onstage, I was kind of in the moment. I'm not even sure I completely stuck to that list. I just felt out the audience and then went with what would work best."

While most of the comics on Sure Thing (Live!) live in Austin, a few hail from nearby cities, including Joe Cardosi, a New Orleans-based comic. "When we knew we were doing this project, we asked if [Cardosi] wanted to be involved because the New Orleans comedy scene is, in some ways, like Austin's sister scene," says O'Grady. "There's a lot of interaction between the two. A lot of New Orleans people moved here after Katrina and were really important to helping the comedy scene here grow." Dallas-based comic Josh Johnson also contributed. "It was kind of important to us to feature not just our favorites in Austin, but the people from nearby scenes that have helped inform the best of what comedy is that isn't on the coasts," says O'Grady.

The album required no reordering or major cuts, and no laugh tracks were added – just two reasons the producers are so excited for the release. "One of the things we're happiest about with the record is that we found a really great balance between it feeling like an album – like each track has a beginning and an end that showcases that individual comic – but listening to it all together, it sounds and it feels like that live show felt," says O'Grady.