The subject matter of postmodernist cultural critic Chuck Klosterman's latest tome, the villain in American society since the Seventies, couldn't be a better fit. After all, there is no humorist alive who seems to thrive more on being unlikable.

Honestly, it's my taste. Klosterman's books consistently sell well. Snark-as-humor and a cultural perspective finding it hipper to prefer Poison to the Pixies apparently works for most. This stance informs everything he's written from Fargo Rock City and Sex, Drugs, and Cocoa Puffs onward. In the right hands – say, H.L. Mencken's or Ambrose Bierce's – humorous essays can be witty, thrilling, deadly accurate, and truly funny. In lesser hands, such as P.J. O'Rourke's or (yes) Klosterman's, it becomes the literary equivalent of the troublemaker at the back of the classroom, cracking wise and launching spitballs – funny only at the most base level and not clever in the least.

This time, Klosterman's excesses are overshadowed (mostly) by the subject matter. He begins with an actual history of the old melodramatic cliche of the black-hatted, mustachioed villain, tying a damsel in distress to railroad tracks, tracing it from a real-life incident reported in an 1874 edition of the New York Times through to Snidely Whiplash, the heel of the Dudley Do-Right cartoon series of the Sixties. From there, I Wear The Black Hat analyzes the odd transformation of Machiavelli's The Prince into a self-help bible for rappers. Then proceeds a rogue's gallery involving Joe Paterno, Republican politicians ranging from Gingrich and Bush and Cheney to (yes) Rick Perry, on to D.B. Cooper, Bernie Goetz, Julian Assange, Kanye West, LeBron James, and Andrew Dice Clay. Along the way, he offers sharp analyses of the Clinton/Lewinsky scandal and Seinfeld's impact on the modern world. The book works best proposing intriguing ideas: the lack of imagination in examining Adolf Hitler (which Klosterman does anyway); how Muhammad Ali was actually villainous for villainizing Joe Frazier; how hating the Eagles is overrated (mostly because he is, as he puts it, "contractually obligated" to do so). Of course, he concludes with himself, for hating admirable former professional baseball player Rick Helling since attending a one-week basketball camp with him in their youth and seeing him display some jerky teenage behavior.

Ultimately, I Wear The Black Hat is a revelation. Given the right material, Chuck Klosterman can produce worthy material. He can still annoy, but it's apropos this time. 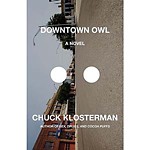